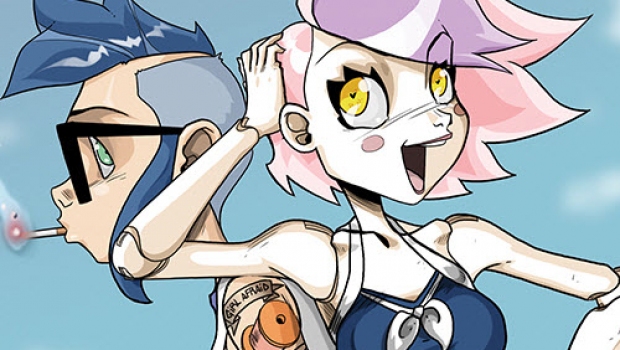 All regular covers and variants are now $3.99!

Still in SoCal, Lila and the gang decide to do a little sunbathing at the local beach. But things take a turn for the worst when witches—Orla’s cronies—come after them.

Vampblade and friends must gear up just to survive, now that SoCal Comic Con has turned into a real… Con of the Dead! It’s two comic geeks and one silver-shiny warrior-woman versus 125,000 vamped-out fanboys (and fangirls)!!

Thoughts and memories are shared about the mysterious and powerful Kaiju Queen. Where did she come from? What’s her plan? Morning and Xula remember the past as they await Janey’s awakening.

Sam Kickwell and his partner in karate and love, Agent Cynthia Weaver, jump-kick their way into the belly of the beast – a Karate-Gang-Filled Mansion! They will have to punch, kick, stab, shoot and even sex their way through one vengeful, weapons-heavy, black-belted gang after another just to get near America’s greatest enemy… the evil dictator, Neon!

Locked away with a Brain, an Athlete, a Basket Case, and a Princess. It’s detention time for Bandit. The Hero Cats of Skyworld meet for the first time!

For centuries, a secret world government has employed the INFINITE SEVEN, the world’s greatest assassins, to do their dirty work. The only way to become one of their members is to prove your worth by killing one of them. But what happens when Anthony Zane, a teenage boy from the suburbs, does just that? Action hero archetypes are reimagined in what is sure to be the blockbuster series of the year! Collecting INFINITE SEVEN #1-4 of the ongoing monthly series.

John Watson doesn’t feel like he really fits in as the new student at Baker Elementary. If it wasn’t bad enough being the only dog, it seems he has already gained the attention of the class bully, Kyle. Out in the play yard, Watson feels even more alone until he meets a young boy named Sherlock Holmes. While quite clever, Sherlock is often so lost in his own thoughts that he is oblivious to the people around him. However, when Watson shows an interest in Sherlock’s work it sparks the beginning of an adventure Sherlock never expected: friendship. Their first mission, identify the bad smell that has been afflicting their classroom.

“First Do No Harm” Chapter 2
Ethan Sharp and his team of doctors provide health care for super villains. They continue to struggle with ethics both on and off the battlefield as the villainous Malady manipulates them. But when Dr. Olivia Stribling befriends abused sidekick Crimson Crow, her troubles are only just beginning.

After losing the municipal election against Mr. Burgeois, D’Argencourt gets akumatized and turns into Darkblade! Using his sword he transforms people into knights and builds an army to turn the Mayor out. His forces storm City Hall where a class rep election battle between Marinette and Mr. Burgeois’ daughter, Chloe, is brewing. It’s up to Ladybug and Cat Noir to protect City Hall and all the students gathered inside!

An adaptation of the Artful novel by award-winning writer and comic book legend Peter David, this Oliver Twist spin-off story stars the Artful Dodger as our reluctant hero. Alongside Van Helsing’s son Bram, Dodger must take on hordes of vampires to save a princess from a nefarious plot.

S.O.S.! S.O.S.! Beaten, drugged and left for dead, things are looking bad for Locke—but unfortunately for his captors, Locke isn’t here anymore. Get ready for a night of psychedelic terror and homicidal violence as Rocketman Reynolds makes his daring escape from Planet X!