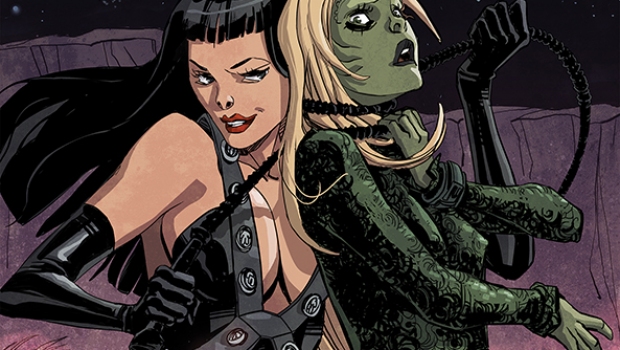 Action Lab Entertainment have released their September 2016 solicitation information, for all their pre-order titles, both all-ages or restricted! And since C4S wants to show the sexy titles first, please make sure to scroll down for all óther titles as well!

Katie’s been on a rough ride of late – fighting Detroit’s toughest infected, battling Space Knights, spelunking in sewage – but things are about to get much worse for our bladed bad ass, because now her weapons are turning on herself!! It’s Vampblade versus… the Vampblades!?!
Features a risqué variant, plus “90s Monster” (Andrew Mangum) and artist (Hyde Chang) variants and risqué variants.

The epic space adventure concludes as Zoe Dare faces off with the alien assassin Yano, while Danni Dare attempts to reroute the Disasteroid from certain impact, and the entire crew faces the realization that not everyone is making it outta this one alive! Explosive oversized final issue!

Illegally incarcerated and held prisoner by a giant monster of a warden, Janey discovers more secrets about her past, while trying to bust her father out and take down a few assholes in the process. Get ready for Part 2 of Skanks, Shanks, and Shackles.

When Jessica is mistaken for the vigilante taking out the Ambidrex 20, Addison disobeys her grandfather’s order to save her friend. The event leads Addison down a dark path from which she may not recover, however, as her attempt at heroism leads to a monstrous conclusion instead.

Raven is on the ropes and the fate of one of her crew hangs in the balance. Raven faces off against the mysterious figure known only as “Our Lady”. Can she save the day and save her friend or is she doomed to defeat and death?

ACTION LAB: DOG OF WONDER VOL. 1: WHO LET THE DOGS OUT?

For five years, readers of Action Lab comics have wondered who the dog in the logo was…now, his story can be told! Join Percy, the titular Action Lab, as he and his Action Lab League take on the case of rescuing a French bulldog accused of biting a little girl! Read the book that EVERYONE is talking about!

Irresponsible Picar must ditch his devil-may-care attitude when his little sister, Regn, and best friend, Chay, are captured by the Baron. Fortunately, he has a few tricks up his sleeve and several new friends to help him mount a daring rescue. One can only hope he won’t be betrayed again.

BLOOD AND DUST: THE LIFE AND UNDEATH OF JUDD GLENNY #2

40 years ago the first American vampire became the unlikely savior to the children of Boggy Depot and forged an unlikely agreement with the town. They leave him and his family alone, and he’ll save any children from whatever lives in the swamp. But now Judd needs saving, and his grandkids only hope is their mother. Only problem is she’s more dangerous than the swamp…

A fresh take on Frankenstein’s Monster. Thrust through a dimensional portal, and landing on a grueling planet that looks like the old west but is in fact full of giant monsters, hellish terrains, and ruled by an evil warlord called The Dragon (who’s actually a dragon). Frank discovers that he possesses incredible power, and a massive choice… fight for good and the survival of this world, or take the easy way out and be corrupted by it – become man or monster. Contains the epic first arc story arc of Bolts.

The high octane conclusion to WEDNESDAY’S CHILD is here! Can a dazed and confused Jake Roth survive his “one vs everyone” battle with the Extrahuman Task Force and save little Madelyn? Or will the girl’s mother complete her mission of murder and mayhem and make a clean getaway?

Showdown at the Eastside Horror House! The Scouts battle their way to the epicenter of the zombie outbreak, but can they stop it before the town is lost forever? The fate of Full Moon Hollow rests in their hands.

The pulp hit returns with the start of a new arc as the Cthulhu Cult uses a familiar ceremony to build flesh beasts from the merged bodies of the unsuspecting. Meanwhile, Twain presents the boys with a gift, but Tesla first has a score to settle at Earhart’s airfield. The adventure continues with “Tying the Knot.”

Adventure continues for a boy from a strange land. While under the protection of a wizard and his apprentice, Kai learns in a world of swords and sorcery there’s no safe place. Follow events as they move from a sieged Dwarven town, a Kings vault, a monster threatened hamlet, to frozen wastes.

Mr. Ramier enjoys feeding pigeons, but the park keepers banish him. Akumatized in Mr. Pigeon, he wants to turn the capital into a huge nature reserve for the birds he communicates with. He abducts all the park keepers, enemies of the pigeons, and imposes a curfew in a Paris invaded by pigeons.

THE ADVENTURES OF MIRU #2

Miru and his new allies begin their quest to uncover the secret of the dragon’s arrival. Hunted by Dr. Monopoly’s hired guns, the trio discover an even greater threat in the shadows of the Wraith Wood.

They’ve played together, rode bikes and gorged themselves on cupcakes, but what else is there for Sophie and her loveable dino pal to do? Would you believe playing dress up? Solving a mysterious banana shortage? Building a rocketship in their backyard? An encounter with space monkeys?!? You’d better believe it, sisters and misters!

Marshall Stone and his crew must save their past archenemy’s daughter from the clutches of a crazed bounty hunters obsessed with an apocalyptic version of their future!

The Puppets debt to the demon god Anapa has been paid, but what was the endgame behind the seven tasks… and are the puppets ready to face what comes next? Anthony’s short reign as Puppet Master may be coming to a screeching halt! Collecting Puppet Master #12-15.

It’s Christmas Eve! Time for Sleigher to cruise around the world and sling some presents, but wait– the evil troll wizard, Leppaluoi, has trapped our main man inside the pocket dimension hidden within Santa’s sack. Ain’t that a buzzkill?! Who’s going to slow down Leppaluoi and his family before they devour the souls of all the world’s children and turn Sleigher into just another run-down, mythical metalhead?

Tim from Finance must join forces with interstellar conqueror Devastator to stop the enslavement of Earth. And a regrettable case of Irritable Bowel Syndrome. Action! Thrills! Cronuts! The final issue of Super Human Resources is upon us. Cover by Justin Bleep.