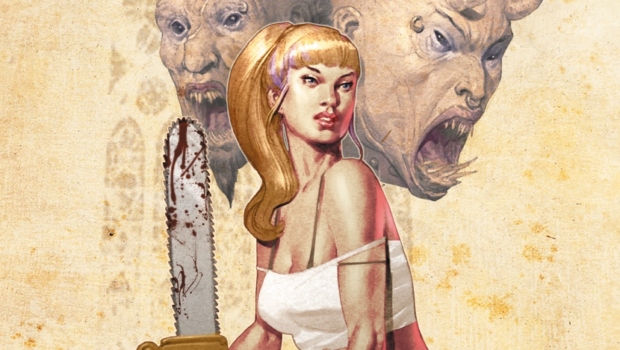 Next June is an Amigo month with all kind of exciting news!
We start of with the return of beloved NANCY, who is stranded in a vast wasteland, looking to survive a demon chase while her Lucifer is calling for her! After 2 miniseries and a crossover with Erik Larsen’s Savage Dragon apparently the story is long but over, just prior to her TV-debut! You can check out the pilot at IMDB, which was funded via Kickstarter.

Amigo Comics is also launching a new imprint , with a new line of books, intended for children and young teens, along with our friends at SallyBooks. That’s the SALLYBOOKS, It will be only one book each month, but we start with two; Cloe and Magpie.

It is also the final episode of Tales of Rogues! and the second volume of the scify-horror title Titan, which will chill your bones while the Cosmic Gods get ready for you!

The wildest one in Hell and her trusty chainsaw are finally back, but it’s not like you expected! After her death, Nancy awakens in Hell. A vast wasteland crossed by a single road, absorbing those who end there. Nancy just tries to survive the relentless demon chase… And, lost in the distance, poor Lucifer keeps calling her…

Titan is the new Mother of Monsters and she has enemies both ancient and blood related. Family can be hell, when they want the world…your world, just to pluck it apart…like a child with a spider. Cosmic Gods have no laws and all rules are open to interpretation.

Overwhelmed by debts, Bram and Weasel have no choice but to accept a crazy proposal… Enter a cursed dungeon, without waking up any of its lethal residents! Tales of Rogues presents new stories by talented final… This time it’s the turn of cartoonists José Luis Vidal and El Flores!

CLOE AND THE CLOUD (oneshot)

Sallybooks and Amigo bring the best for kids and young readers! Cloe is a cheerful and likeable girl who is always laughing and having fun. One day Cloe is playing and suddenly… Rain!!

Alex longs for knowing the world. A strong force makes him want to know more and more about him, his curiosity. But Alex doesn’t know the world is even bigger and odd than what he could imagine. Along his way, he will know the Nature forces and, above all, he will know himself.