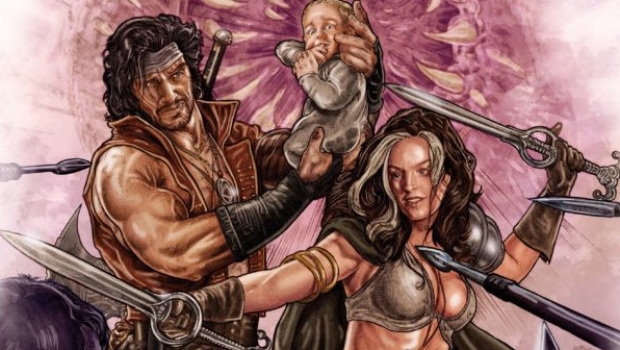 This month’s catalog Amigo Comics only have a few books… But, oh, what books! The third episode of the miniseries by El Torres and Ramiro Borrallo… THE APOCALYPSE GIRL! And now you can read the fourth volume of ROGUES! in a magnificent trade!
But there is even more! Don’t forget to order the acclaimed by critics and readers miniseries UNLEASH, offered again in a wonderful trade! Written by El Torres and screenwriter, producer, writer Jennifer Van Gessel (Beast No More, Nancy In Hell), with the stunning art by Nacho Tenorio and Sergio Mora (Dark Shadows, Army of Darkness…)

“You ain’t my mother! You ain’t the boss of me! You are just a… an undead thing in a world of scary stomping giant demons and scariest angels! And you let me be born in this chaos! I didn’t ask to be born in this world!” The End of the World has an upside: there’s no school. But, how do you spend the time? Metis does what every teenage girl does: listen her music, fight with mom, think about the sexy, Silent Angel, think about John… and fighting with mom again.
Apocalypse Girl has received a “Spotlight On” from Previews!
UPC Code: 732030830837—00411
SEP171141 – STL062755
32pgs, FC $3. 99

Writer: El Torres
Art: Nacho Tenorio, Sergio Mora
Cover: Nacho Castro
The funniest rogues in all fantasy realms are back! In the mythical city of Gerada, Pearl of the South and Cradle of Humankind, our rogues Bram the barbarian and the thief known as the Weasel, try to survive and deal with the adventures that, literally, hang over them… and this time, this adventure is an insufferable baby!
An evil concubine seduces an evil patrician who commands an evil man-at-arms who hires an evil wizard who summons an evil earth elemental and evil vampiresses to kill a child, the child that the-not-so-evil (but sometimes wicked) Bram and Weasel are reluctantly guarding!
We have magic cards, overpopulated dungeons, fights to the death in dirty alleys, family problems, royal conspiracies, learned monsters, polyamorous relationships and religious processions with turkeys. This is probably the funniest Rogues story ever!
This volume contains issues 1 to 5 of ROGUES!: ODD PARENTHOOD, published in the United States by AMIGO COMICS. This fun and adventurous series have been described as a book that “put the 80s fantasy/sword and sorcery feel in today’s storytelling.”
SEP171142 – STL062754
120 pages FC
Rogues! has received a “Spotlight On” from Previews!

Emmie’s life changed forever when she was assaulted. She’s determined to find her attacker and has formed a team with the most unlikely partner you could imagine: The Rape Machine. Together they lay down their own brand of twisted justice upon sexual predators.