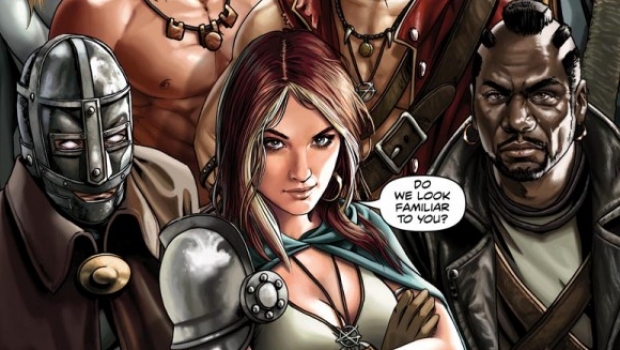 The debut of Amigo Comics first book for all ages is coming up with tentacles, so stay tuned to our Facebook page where we’ll be giving away more info about… ARCANE SECRETS!

This summer, we don’t only have our usual dosis of fantasy and horror. Jump into Amigo first book for kids with the palpable, palpitating, palsied, ambiguous, amorphous…and really fun Arcane Secrets, by Angel Antón Svoboda; and the misadventures of Weasel, the sultry female of Rogues! series continue in Diego Galindo and El Torres’ fantasy-sword-and-fun series.

Sadly, we say goodbye to the real horror of The Westwood Witches, in this epic series finale!

The final episode! This is the final showdown between Jack the writer and the Witches of Westwood! What horrible price paid Jack back in his childhood that even today it haunts him? Nightmarish revelations will be made… past, present and future unveiled in the whole tapestry of this modern witchcraft horror tale!

“This is the kind of mystery that I love reading. It pulls you in and lures you with points that you think will lead you in one direction then completely pulls you in multiple other directions.”

There’s still time to grab yourself a copy! Search your Previews and pre-order it.

The criminals in the City of Crime are almost wiped out. But the Great Families of the Thieves’ Brotherhood have an ambitious plan: Gathering the most dangerous, vicious and villainous crooks, they just need the most notorious-but-not-so-vicious rogues –Bram and The Weasel, to guide them through the secret passages and assault the Grey Palace itself!

“This comic is actually very, very good. It’s something that the industry has needed for a while and I don’t even think they knew it. Pre-order, order it online or hope you’re shop gets it, but you need to read this book.”

Search your Previews and grab a copy when there is still time!

Lovecraft for kids! Cthulhu mythos for all the family! Join Doctor Ment and his faithful companion Harry Callahan in the fight against The Things That Go “Boo” In The Night! Many ancient artifacts of the Dread Xulu and other Elder Beings are lost, and if Ment and Callahan doesn’t retrieve them, the evil minions of the evilness will do it!

AMIGO join forces with DIBBUKS, the renowned Spanish publishing house, to release the all-ages adventure ARCANE SECRETS for the American readers! This is not a cute Cthulhu for kids. The danger is real! And only Doctor Ment, the brave Harry and the… strange creature called Elvis can stop it. Adventures, craziness and hectic fun are the trademarks of Angel A. Svoboda, the creator behind the Arcane Secrets!