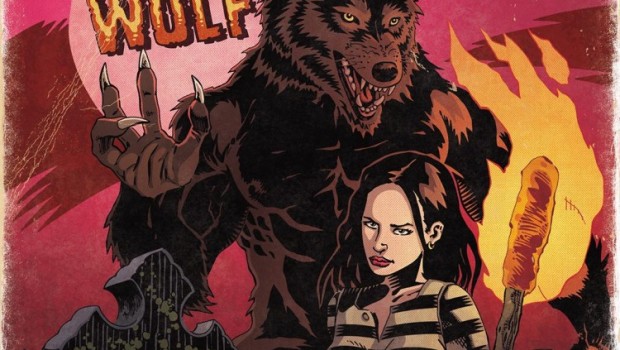 These are our awesome amigo books that you may (you should!) preorder at Previews if you like our comics.
The dark path of the revenge takes Emmie and The Machine in a twist at Unleash, this time with an awesome cover by Javier Fernández (now the start artist in the upcoming Nightwing at DC!), while Bram and Weasel returns in their third Rogues TP, that will feature the complete stories The Burning Heart and The Crypt of the Rotten Gods.

And one of our best zombie-hammering-bimbo returns! The grindhouse-homage creation by Massacre will be facing some hairy problems. Werewolf problems that aren’t what they seem. We proudly present: Sidney Hammer vs the Wicker Wolf!

Preorder them and support the amigo cause!

Sidney Hammer vs The Wicker Wolf

Story and art by: Massacre

Sidney Hammer, the scantily-clad, sardonic, grind-house reporter is back! She only wanted a cold beer, but Sidney has found herself looking for a missing girl and being hunted by a big bad werewolf! And this time Sidney doesn’t know if the tabloid she’s working for will pay for the investigation of this spooky case!
Spanish artist Massacre returns with the sassiest hack of all!

Every story has a beginning… and this is how Bram and Weasel met for the very first time! The original tale featuring art by maestro Juan José Ryp, remastered, where our rogues have to fight an angry fire god — and get into a forsaken crypt full of gods also.
Includes the full stories “The Burning Heart” and “The Crypt of the Rotten Gods”.

“When you have this creative combination it’s hard to produce a bad issue. I mean Ryp alone is worth a five, but the fact that the story is entertaining and well-plotted and the coloring adds to Ryp’s artwork makes this one of the best titles out this week. The great part is, you don’t need to have read any of the other Rogues! volumes to enjoy it.”