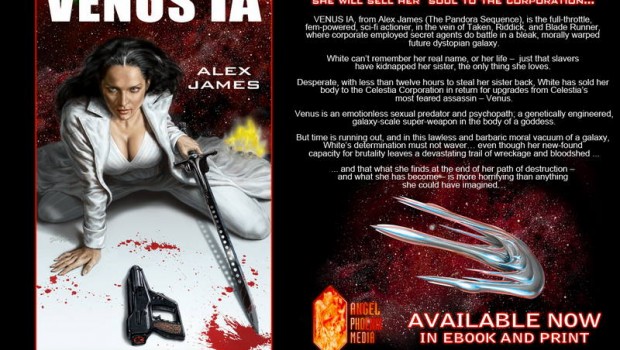 To celebrate and kick off the launch of ANGEL PHOENIX MEDIA in style, at the world’s pop culture Mecca, San Diego Comic-Con, 18th-22nd July 2013, we’re having a huge FREE eBook Promotion exclusive to Comic-Con week, where anyone, anywhere in world with access to the internet can visit angelphoenix.com/promo and download a free copy of our 3 debut eBooks –

THE PANDORA SEQUENCE – the tour-de-force meta-thriller by Alex James (Venus IA, Blake’s 7, Territorial), that dives headlong into the mythologies that are resonant in the world today – conspiracy, the alien agenda, and radical planetary change.

ANGEL PHOENIX MEDIA makes bold, original Sci-Fi, Fantasy, Horror and Supernatural projects for Film, Television, Print, Web TV and the emerging Digital Comic market, that will fire the imagination of fans the world over and leave them demanding “MORE!”

ANGEL PHOENIX MEDIA is the brainchild of Gary Turner, the twenty-five year veteran and award-winning international music publisher, and brings together an international team of super-talented and passionate artists, writers and directors, from the worlds of Film, Television, Games, Books and Comics, whose amazing works include such celebrated titles as “300: The Rise of an Empire”, “Snow White & The Huntsman”, “Hugo”, “Flags of Our Fathers”, “2012”, “The Grudge”, “Blake’s 7” and on Marvel Comics “Wolverine” and “Phantom”, and DC Comics “Catwoman”, “Batman”, “Teen Titans” and “Superman”, and Innovations “Lost in Space”, as well as numerous cutting edge music videos and video games.

ANGEL PHOENIX MEDIA will be at BOOTH 1303 @ San Diego Comic-Con.