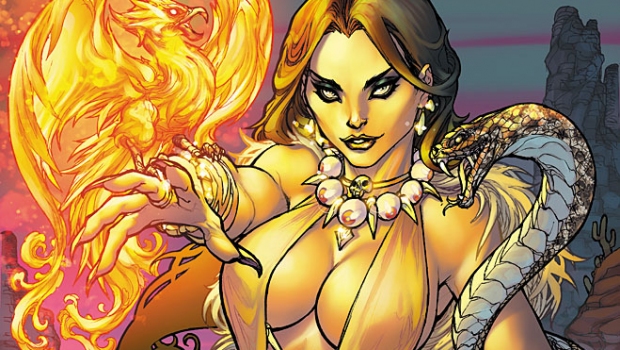 Aspen Comics has revealed their much-anticipated Phoenix Comic Con 2013 exclusives as well as their list of creators that will be available at the Aspen Comics Booth #’s 873 and 972 all weekend long.

The popular Aspen Splash swimsuit pinup book by Aspen returns this year with an oversized special edition featuring both new and classic pieces by Aspen’s top talents and more. The Aspen Booth #873 and 972 will be offering an exclusive Aspen Splash 2013 Phoenix Comics Con edition with a cover by Aspen founder Michael Turner along with superstar colorist Peter Steigerwald, limited to 250 copies.

The best-selling “10 for 10” initiative celebrating ten years of Aspen Comics continues with two all new “10 for 10” exclusives for the convention. Aspen’s critically-acclaimed series Charismagic returned in May and will feature a special Charismagic #2 Phoenix Comic Con 2013 cover by artist Paolo Pantalena and Steigerwald limited to 200 copies, two weeks prior to its release exclusive only for PCC attendees. Aspen will also be offering an exclusive for their new top-selling fantasy series with a Jirni #2 Phoenix Comic Con cover by series artist Pantalena and Steigerwald, limited to 200 copies.