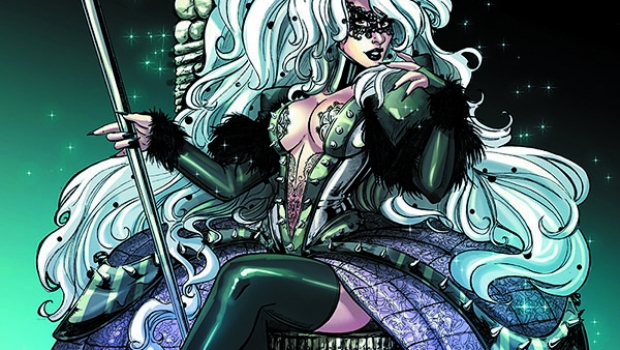 Aspen Comics has provided C4S with their pre-orderable titles in stores worldwide August 2014.

As the remaining ladies turn on Bethany following the reveal of the men’s final wish, the princess finds herself alone in the Five Realms with everyone out to murder her. Yet, not all citizens—and rulers—of the Five believe in following the pleas of a dying gender, as she will discover. However, first, she must find a way to escape Crossman’s Hall before Barra’s soldiers can end her reign—and her life!
Creator Vince Hernandez and artist Mirka Andolfo present to you the newest Aspen hit series – DAMSELS IN EXCESS!

Conrad arrives in Sinmora, and is shocked to find out that Lola’s life may be in danger. Meanwhile, a weakened and bloodied Wasteland Trading Co. finally find solace in a small town that may prove hopeful for a post-apocalyptic future ahead. However, Lola soon realizes that looks can be deceiving, and nothing is as it seems in the Wasteland—and this mistake could be her last!

Discover the treacherous origin of Killian, Fathom’s original villain—turned—Elite Commander of the Blue! Years before the events of Fathom Volume 1 and his failed attempt to convert Aspen Matthews, a much younger Killian learned the true nature of rebelling against the Blue’s resident Elite Council, as well as what it takes to motivate others to his cause—including his lover and future wife, Anya. However, the youthful dissident soon realizes the tremendous cost of such insolence—and the bloody sacrifice that follows! Including the sold out Killians Tide mini-series and the one-shot follow-up to this acclaimed story arc, “Killian’s Vessel,” this is a must-have for any Fathom fan!