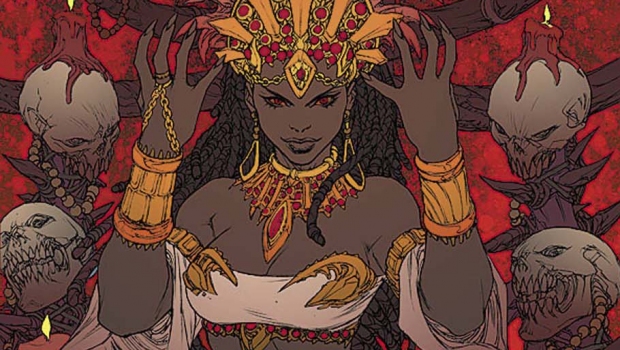 ASPEN/BDI has shared their March 2016 Solicitation.

The first brand new Aspen series to debut in 2016, from the creator of Executive Assistant: Iris, Legend of the Shadow Clan and Witchblade, and the artist of Fathom: Kiani comes a new tale spanning centuries, deep within the heart of the ancient civilizations of Africa…

Prepare yourself for the return of – OVERTAKEN!

It is the final showdown as Dorothy goes one-on-one with the Witch of the West. Yet, even if she is victorious—she may still lose everything!

The price of freedom is often as costly—and fatal—as a life of servitude!

They are raised and trained to protect and serve their masters with discipline, loyalty and often violence if necessary – they are the Executive Assistants. Yet, what tales of corruption and depravity, aggression and fatal destinies await them on each of their collective paths? Collecting the three-part ‘”Life After Death” storyline featuring the popular Executive Assistant, Lily, and her attempts to piece together a life after losing her master along with her allies, along with the two-part “Sophora” storyline, taking place in the high seas with an all-new Executive Assistant, this first ever Executive Assistant Assassins TPB is an absolute must!