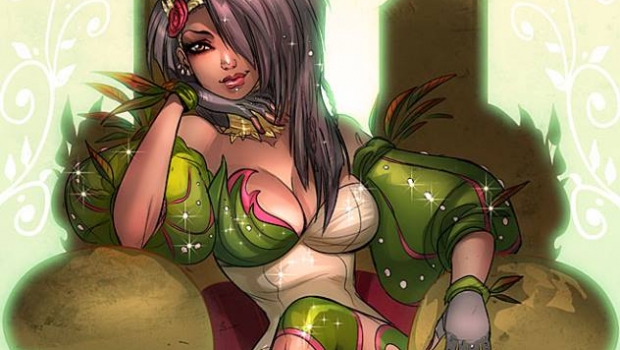 Aspen Comics will be releasing their second all-new original series of 2014 this July 23rd, with the fairy tale adventure series, Damsels in Excess. Created and written by Vince Hernandez (Fathom: Kiani, Charismagic) and featuring artwork by Mirka Andolfo (Chaos!) and Simone Di Meo, this new property stars five princesses struggling to hold power over the Five Realms, a land cursed with the extinction of man. Creator Hernandez states:

“Damsels in Excess is the tale of five respective kingdoms commanded by these unique and formidable princesses, in unison, facing a catastrophic set of circumstances in an ancient and magical world. However, the story itself is written in what I like to call a ‘contemporary fairy tale’ fashion, so readers will hopefully find this experience both familiar in the fantasy sense, yet modern in the way the narrative comes across on the page. I’m very excited to see how readers will respond to this type of reality show format set in an ancient land.”

Damsels in Excess #1 is available now for pre-order and features covers by series artist Mirka Andolfo, along with incentive covers by Elizabeth Torque and Agnes Garbowska. The publishers will also accompany the release with a special SDCC 2014 variant by Siya Oum to be revealed soon, in conjunction with the release of Damsels in Excess #1 during the week of Comic Con International in July.

Aspen MLT, Inc. is an entertainment publishing company founded in January 2003 by superstar comic artist Michael Turner. Priding itself on producing entertainment properties of the highest quality visual and storytelling elements Along with their own successful properties such as Fathom, Soulfire, Executive Assistant: Iris, Charismagic, BubbleGun and more. Aspen also collaborates with the comic industry’s most successful companies and endeavors including Marvel Comics and DC Entertainment. Aspen has collaborated with Marvel for various hit projects, including cover work for the best-selling events Civil War, World War Hulk, and Ultimatum. Aspen collaborated with DC Comics to provide covers for such best-selling titles as Superman/Batman: The Return of Supergirl, The Justice League of America, and Eisner-nominated covers for the critically acclaimed, best-selling Identity Crisis series. In 2006, Aspen joined forces with television giant NBC to create the online comic adaptations for the hit television series Heroes. In 2012, Aspen teamed up with Gale Anne Hurd’s Valhalla Entertainment to produce the horror-adventure series Dead Man’s Run, as well as collaborating with director McG’s Wonderland Sound and Vision to produce the horror comic Haunted City. Aspen also produced the one-of-a-kind Anarchy digital graphic novel for the popular body spray company, Axe. Recently, Aspen celebrated their tenth anniversary in the industry with their successful and best-selling “10 for 10” initiative.