C4S with their titles to be pre-order..." /> Aspen Comics July 2014 Solicits – Comics for Sinners
Solicits 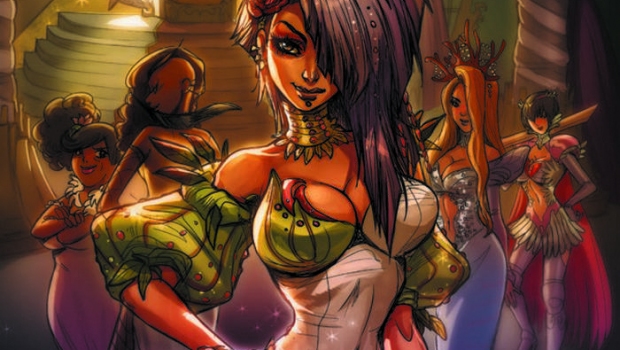 Aspen Comics has provided C4S with their titles to be pre-ordered ASAP to be picked up in stores worldwide July 2014.

In the land of the Five Realms, the existence of men has long since been evaporated from the hearts and minds of women. Princess Bethany–ruler of Evanfar, the largest and most prominent kingdom, finds herself at the center of a vast conspiracy that could not only threaten her kingdom—but also her life! Journey to a place where magic is abundant, unicorns and ferrets can command armies, and five women struggle to find balance—and power–in an ever-changing fairy tale world!

The Dark Lord Rainier has been defeated, and Malikai—the Samusara, set forth the return of the light. Yet, the return of magic has created problems across the globe, as Grace attempts to bring order to a world devoid of magic for thousands of years. Meanwhile, Rainier, in his endless crusade to rid the world of magic and all that it encompasses, decides the only way to extinguish the light is by fusing both technology and magic in horrific fashion—with terrifying results! Collecting together the sold out Zero issue, as well as issues #1 though #9, plus the rare 10-page Sonia story from Aspen Seasons Winter and the 20-page ‘Resurgence’ story previously only available in the Soulfire: New World Order mini-series, this is 296 pages of everything Soulfire volume 2! And if that’s not enough, we’ll be including a complete covers gallery featuring artwork by such artistic forces as Joe Benitez, Randy Green, Nick Bradshaw and Soulfire creator Michael Turner!! This complete SOULFIRE (vol 2) TPB: DRAGON FALL is a must for any Aspen, Soulfire, Michael Turner, or comic book fan!

The world of magic has gone dark…

Before the return of the light forever altered the events of the present SOULFIRE universe, a long ago era of flourishing magic enveloped the land as well as SOULFIRE’s preeminent heroine, Grace. Amidst a bloody war between the two dominant races, the Rahtumi and the Sethoru, that endangered both of their existences, an even greater threat soon emerged. It is a malevolent form of magic that threatens to cast a dark shadow over all that is decent and magical by consuming everything in it’s path. And through all of this perilous disorder, Grace attempts to overcome the greatest obstacle she has yet to encounter in her time in Empyrea—the bonds of love. Collecting together the entire sold out SOULFIRE: SHADOW MAGIC mini-series, and fully illustrated by Sana Takeda, this long-awaited trade paperback is a must have addition to everyone’s SOULFIRE collection!

From the depths they ascend…

As Ara continues her voyage across the seas, she comes to discover more about her guide – Captain Boro. Yet, any bonding between the pair is interrupted when an ancient evil rises from the depths, intent on destroying them all! Boro’s men have heard many tales of the fabled mermaids, but when it comes to legends, sometimes the truth is far more terrifying than the myth!
JIRNI vol 2 #3 is in stores July 30th, 2014!