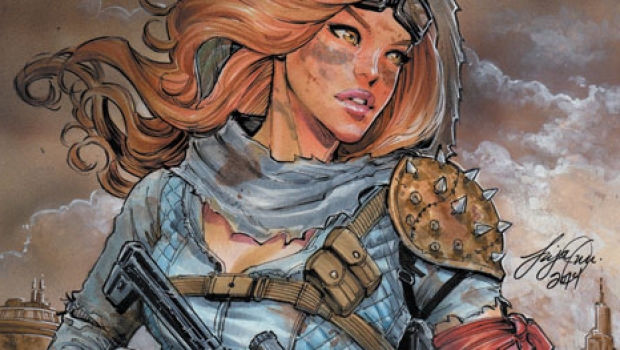 Aspen Comics has provided C4S with their July 2017 Solicitations.

She was once a woman with a promising future and the love of her life by her side. But, following the nuclear holocaust that eviscerated the city of Chicago, the “Wasteland Madam” has evolved into a ruthless leader, responsible for protecting a band of survivors from the threat of annihilation. However, that’s easier said than done in the Wasteland-where the law of the land is enforced by blood!

The team manages to regroup but continues to face inner strife, as Kyo finally reveals his secret to all of them. However, more surprises are in store for the crew—as they get an unwelcome surprise visit by their old teammate Roman–who isn’t there for a reunion!

The corporation of evil has taken control and with our heroes helpless to stop the coming threat, who will be able to step up and prove their worth?
Written by legendary Uncanny X-Men scribe Scott Lobdell (Michael Turner’s Fathom) with art by Jordan Gunderson (Aspen Universe: Revelations), this is THE NEW Aspen title you won’t want to miss!

Exposed, Rainier watches as his entire empire comes crashing down around him, yet he’s not the type to admit defeat. He’s determined to rule over all – even if that means leaving a pile of corpses in his wake!

The stakes have never been higher as Aspen races to recover the failsafe, or risk The Typhos laying waste to human cities worldwide. Can a tenuous alliance with the traitor stop a massacre, or does Cannon still plan on destroying the Blue from within?