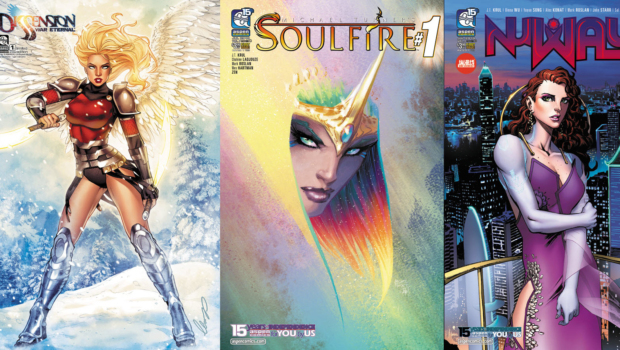 Aspen Comics has provided C4S with their July 2018 Solicitations.

New readers and fans alike can find everything they need to know about Aspen’s flagship title in this new Michael Turner’s Soulfire 15 Year Anniversary Primer issue! Join in on the battle between Magic and Technology, and one young orphan’s quest as the “Bearer of the Light” to usher in a new era of magic! Check out never-before-seen commentary, art and creator secrets in anticipation of Volume 7 and more…All for only a quarter! These Aspen Anniversary edition primer issues are the perfect compliment to discover more about Aspen’s upcoming slate of new and returning titles!

Join Aspen Comics’ top talent as they have fun in the sun and offer a playful look at our most popular characters! Industry talents and Aspen veterans such as Siya Oum, Jordan Gunderson, Alex Konat, Talent Caldwell, Marco Renna and more grace the pages of this gorgeous pinup book! Don’t miss the return of the HOTTEST book of the summer!

Don’t miss the first chapter of an electrifying story in a bold new world. Aspen is proud to partner with ZMX Entertainment on their landmark project created by J.T. Krul, Yuyan Song, and Dinna Wu, and featuring the stellar creative team of Alex Konat, Mark Roslan, John Starr, and Sal Cipriano.

This all-new adventure for Aspen’s preeminent hero sees her attempt to navigate an ever-changing world where The Blue are not only present above the surface—but exploited in new and dangerous ways. With her brother Finn suddenly missing, Aspen Matthews takes a deep dive to look for help, arriving in a majestic undersea city. Will she find the allies she so desperately needs, or enemies looking for vengeance? Meanwhile, the mysterious agents who have kidnapped Finn begin a series of unholy experiments to unlock the secrets of his powers!

Iris’ journey to Rome ends in murder and mayhem, and a game-changing discovery that reveals Magni Global Security’s true intentions. When Iris confronts Alexander with her findings, she’s given an ultimatum…and an assignment that she never saw coming!

Sybil has abandoned her friends! As she makes her way to face her father alone, an unexpected but familiar face lies in wait, but are they friend, or foe? Meanwhile Emperor Atilus has all but completed his plan to return Havos to the war-world it was in the glory days, and the Portal Bound crew faces it’s biggest challenge yet… Brett?

Ara has once again come face-to-face with the evil sorcerer Torinthal as she tries to free her mother. But, she never imagined where her search would lead her and what life-changing results might befall her. If she’s survives. Don’t miss the climatic finale to the biggest Jirni story yet. The Fall of the D’jinn!

All bets are off as the Magic Harvester’s plan to eliminate all magical beings– and humans in the process—and start over with a new civilization is set into motion. Only Hank, Sudana and their allies hold a fighting chance to save the world of magic from imminent doom in this epic finale to Charismagic volume three!

A storyline over 12 years in the making, the finale of Shrugged volume 3 will set the stage for the future of the series, in ways you’d never expect! As Theo, Kiori, Ange, Dev and one unexpected ally make one last attempt to save both Earth and Perspecta, relations between the humans, Elysians and Nefarians will never be the same again!

Return to the world of magic with MICHAEL TURNER’S SOULFIRE in this great jumping-on point for new readers!

Please join longtime Soulfire writer J.T. Krul, artist Giuseppe Cafaro and colorist Wes Hartman, as they bring readers back to the wonder and everything you loved about SOULFIRE! Collecting together the entire sixth volume and including a complete cover gallery, this newest SOULFIRE Vol 6 TPB is not to be missed!

Discover the early years of Soulfire’s heroine Grace in this acclaimed mini-series!

The seeds of conflict have grown into a deadly battle for territory as the winged races of Rahtumi and Sethoru enter into an all-out war. Amidst the chaos, two Rahtumi lovers, Grace and Kelsyn, share their own pending engagement, that of marriage. But the reaches of war soon envelops them both, and their life together will be forever compromised! While high in the snowy mountain passes of the Sethoren realm of Ontiria, the dark wizard Azar, using his own horrid creation of a powerful new form of magic, plans to overshadow both kingdoms of Rahtumi and Sethoru in death and despair.