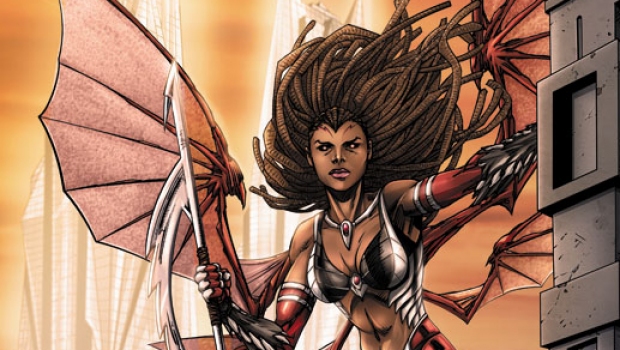 Aspen Comics has provided C4S with their June 2017 Solicitations.

Treachery and deception are the order of the day, as the BubbleGun team learns the cold hard truth about the perils of working in the black market. Their “employer” Sir Penny has put his “Nectar” into production, and the market is booming. But, is the crew too far deep into Sir Penny’s tangled web of lies to survive?!

Creator and writer Mark Roslan (Broken Pieces) is joined by penciler Angel Tovar and colorist Erick Arciniega on what’s sure to become one of comics’ biggest sci-fi, action adventure series of the summer! Strap yourselves in because BUBBLEGUN is gonna take you on a wild ride!

The uneasy alliance learns that they must come to a sobering compromise in order to take on the greater threat—the manufacturing evil on a scale unlike anything seen before. However, even the collective actions of this super-powered group may be too late to stop the machinations of this malevolent conglomerate!

With the help of Sonia, Grace is finally able to reach Maliki and expose Rainier for who he really is –yet what darker secret is lurking in the shadows, and what secret horror awaits?!