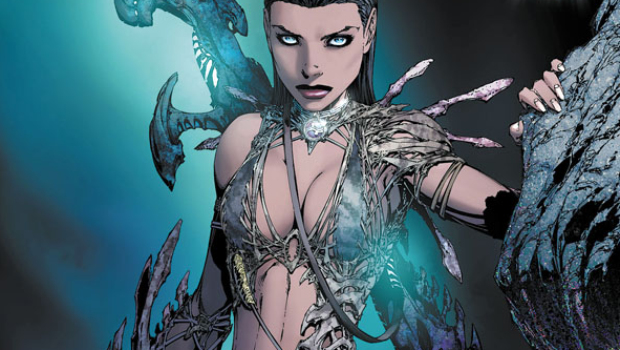 Aspen Comics has provided C4S with their June 2018 Solicitations.

From his groundbreaking creations of Fathom and Soulfire, to his award-winning run on DC Comics and Marvel’s most iconic covers, superstar Michael Turner’s career and life spanned an amazing journey that fans and readers alike can now commemorate with this amazing special! This Legacy issue captures everything you’ll ever need to know about Turner in addition to rare photographs and artwork from his career, special memories from colleagues and much, much more!

All net proceeds from this tribute issue will be donated to the American Cancer Society.

Iris and Mack’s first assignment as a team doesn’t go as planned, as chaos erupts when a protest turns deadly violent, and they must improvise to save an innocent man (and themselves) from hundreds of armed thugs! Plus, things get explosive!

With Perspecta on the brink of destruction, Theo and Kiori embark on mission to try and save the planet, but even with the help of the Butterflies, are they already too late? And as the Nefarians are moments away from declaring ultimate victory, an unexpected sacrifice will turn the tide, as Dev and Ange struggle against unbeatable odds!

ASPEN MATTHEW’S role in the brand new ASPEN UNIVERSE, spawning out of last summer’s mega-event, Aspen Universe: Revelations, is larger than ever! The preeminent heroine must navigate the treacherous divide between the humans and her ancestral people of The Blue—as well as the surprises in store for both races in a landscape where anything is possible!

Please join newcomers, writer Blake Northcott and artist Marco Renna, along with colorist John Starr, as they bring readers under the surface into the world of The Blue, and everything you loved about FATHOM! Collecting together the entire sixth volume and including a complete cover gallery, this newest FATHOM TPB is not to be missed!

Memories of the past come crashing into the present in the newest FATHOM TPB, BLUE DESCENT!

Aspen Matthews is the link between the world we know and the world below, but the secrets of her past have always remained shrouded in mystery-until now! FATHOM: BLUE DESCENT journeys back to the life of Aspen’s true parents, members of the underwater race known as the Blue, and the strife they encountered before she grew to become the woman we know today. Over a decade’s worth of answers spill out onto the pages of this exciting, all new FATHOM: BLUE DESCENT mini-series!