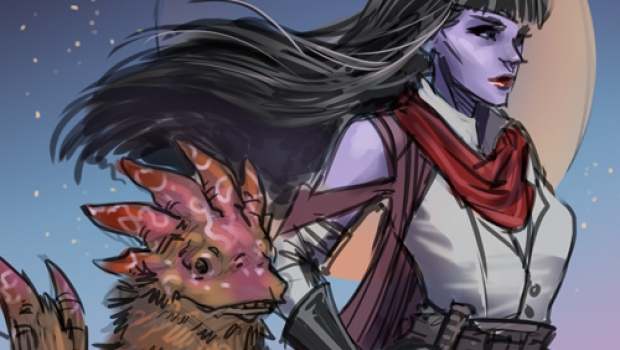 Aspen Comics has provided C4S with their November 2014 Solicitations.

There IS life on other planets—THEY find it.
Abros has been teaching his son Ty the skills it takes to be a ZooHunter when on a far frozen planet they are ambushed by the rogue ZooHunter Minalara! What menace does her appearance spell for our duo? Read issue two to find out!
Creator and artist Peter Steigerwald presents to you the newest Aspen hit series – THE ZOOHUNTERS!

RETAILER NOTE: THE ZOOHUNTERS #2 will ship with two different covers by series artist and creator Peter Steigerwald. Each cover is available to order separately, with no quantity limitation or restrictions.

Five realms. Five princesses. Zero men.
The war for Evanfar begins as Bethany and Kimberlein make the decision to take back the kingdom by force—even if it means destroying the union of the Five Realms forever! The climactic—and deadly–end to the first volume will forever change the lives of all the princesses forever

RETAILER NOTE: DAMSELS IN EXCESS #5 will ship with two different covers by series artist Mirka Andolfo and Andrea Merloni. Each cover is available to order separately, with no quantity limitation or restrictions.

SEVEN TO DIE tells the story of Lex MacArthur, a San Francisco college student who comes into possession of an enigmatic clay pendant that unlocks a bevy of dormant superhuman genes. She’s stronger, she’s faster, and she’s on a mission to find out why. As Lex sets out to discover who she is and where she really came from, she comes face-to-face with Egil, a killer who has been tracking Lex her entire life. At the helm of an enormous operation to eradicate all of Lex’s kind, Egil captures Lex’s long-lost mother, forcing Lex to confront him head on and save those she loves from certain death.

Aspen Novels continues its genre-spanning adventure into the prose world with this latest young adult, urban fantasy thriller that is an edge-of-your-seat page turner!