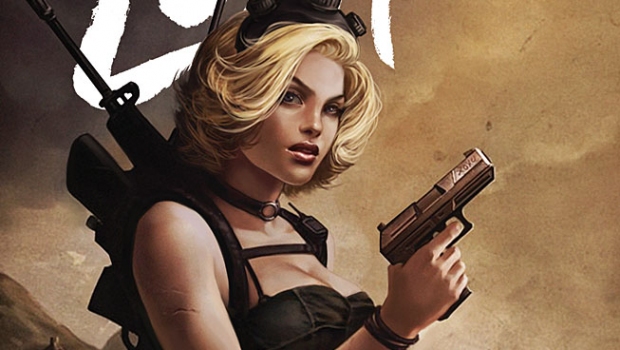 Aspen Comics is thrilled to present its first new property of 2014 on April 9th, the action-adventure series Lola XOXO, created, written and illustrated by Siya Oum (Charismagic, Executive Assistant: Iris). The highly anticipated upcoming six-issue series unfolds in a dystopian western tale following young firebrand character Lola, who has been raised under the protection of a band of traveling merchants. Despite potential dangers in the “Wasteland,” Lola decides to perilously traverse what’s left of the United States in a desperate—and deadly—search for her parents. Oum discusses her enthusiasm for the project:

“It has always been a dream of mine to have my own series. It hasn’t quite hit me. I can’t imagine how I’ll feel when I get the first printed issue in my hands. I feel like everything I’ve ever experienced, everyone I’ve ever cared for has a hand in inspiring the creation of this Lola XOXO. I couldn’t have asked for a better publisher and a better group of friends to guide me through the process. I am forever grateful.”

Aspen strongly encourages fans to visit their local comic book stores to pre-order the first issue of Lola XOXO, which boasts eleven covers of Oum’s own design. Future issues will feature cover art from a myriad of the industry’s top artists such as Joe Benitez, Jordan Gunderson, Ale Garza and more to be announced soon. Aspen Editor in Chief Vince Hernandez encourages fans to check out the publisher’s latest offering:

“Siya [Oum] and Lola XOXO have exceeded all of our expectations, and we’re excited to be able to show everyone the result of all her hard work. I’ve had the pleasure of seeing this project from its earliest stages of development, and it’s really been a labor of love for her that shows on every page. I think everyone who checks out the first issue will agree!”