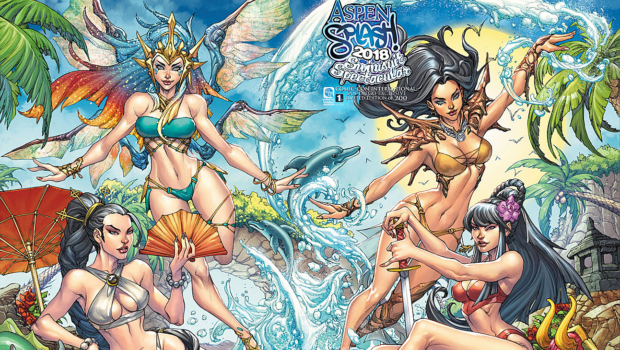 Aspen Comics has premiered their Wave 1 releases of exclusives for their upcoming appearance at Comic-Con International: San Diego 2018 this year, in addition to announcing their official Aspen Comics 15-Year Anniversary Panel. The publisher is celebrating their 15-Year Anniversary in 2018, and for this year’s convention, is planning one of their most ambitious collections of con-exclusive releases ever. All exclusives will be available while supplies last at the Aspen Comics Booth #2320.

The publisher’s Wave 1 includes all of the following Aspen Comics titles with a con-exclusive cover, including milestones for Michael Turner’s Fathom and Soulfire, celebrating 20 and 15 years respectively for each title. Below is the complete list of Aspen’s Wave 1 SDCC 2018 releases: 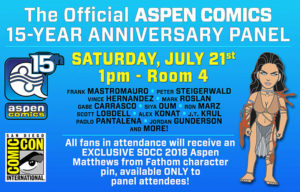 The Official Aspen Comics 15-Year Anniversary Panel 2018 will be taking place on Saturday at 1pm in Room 4 and will feature the entire Aspen Comics staff as well as Aspen creators Siya Oum (Fathom), Ron Marz (Fathom), Scott Lobdell (No World), Alex Konat (Nu Way), J.T. Krul (Michael Turner’s Soulfire), Paolo Pantalena (Oniba: Swords of the Demon), Jordan Gunderson (Dissension) and many more, who will reveal upcoming titles for 2019, look back at their 15 years of publishing, and offer a special fan Q&A. Also, all fans in attendance will receive an exclusive limited edition SDCC 2018 Aspen Matthews from Fathom two-inch character pin. This limited edition enamel pin is the first in a brand-new line of collectible pins from Aspen Comics created by popular pin maker, FanSets, and will only be made available to panel attendees.