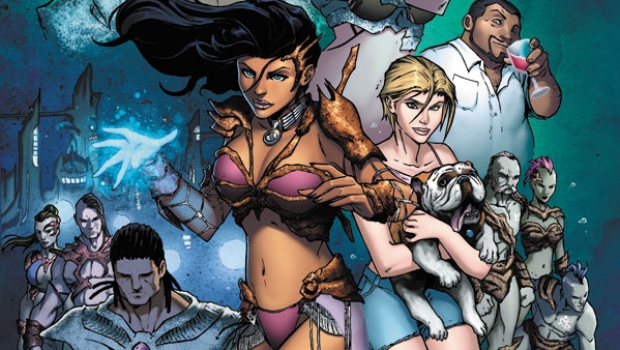 Aspen Comics has provided C4S with their September 2017 Solicitations.

Lola barely scrapes by with her life after an attack by the Legion of Suits on the city of Artemis. Now she must take care of a young boy, Isaac, whom she barely knows–and bring him home safely. However, the mystery of where Isaac hails from will put Lola’s life—along with everyone she knows–in mortal danger!

In order to stop the Nectar drug from mass distribution across the city, the BubbleGun crew sets out on what could be their final mission! The team stares down insurmountable odds amidst a final stand against Drazic, along with his legion of deadly security bots led by their traitorous former teammate, Roman. Can they stop Drazic’s dream of a new world order?!

The group must come to grips with the fact that Pardner Bob’s plans to manufacture evil on a global scale may be too far along to stop—along with the realization that the entire world may be done for! The final issue sees this banded-together team’s last-ditch effort to rescue not only themselves, but all of humanity as we know it!

As Maliki’s power surges, his connection to the Samusara–the life force of all magic–forces him to confront the fact that his reality may not be the true reality. When presented with the notion of another timeline and another destiny, will Maliki have the courage to make an impossible decision?

Blake Northcott – Story / Marco Renna – Art / John Starr – Colors
The pulse-pounding volume six finale is here!
With the aid of Tyler and Chance, Aspen Matthews must depose the brutal dictator invading the capitol city of The Blue, her old ally and mentor, Cannon Hawke! However, saving her people won’t come without sacrifice!
Aspen makes a shocking discovery about Cannon Hawke that could forever change the landscape of The Blue civilization—as well as their ties with humanity!