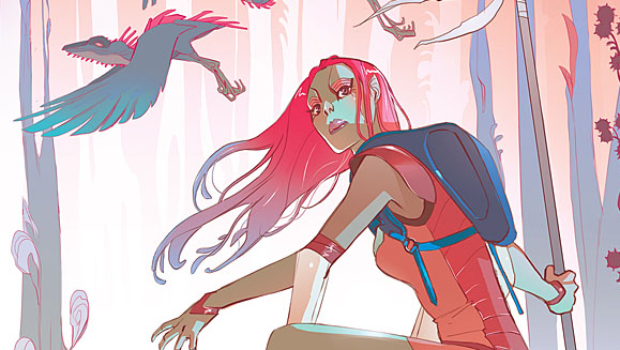 Hot on the heels of their recent announcement and partnership with Mythos Studios and David Maisel and Scooter Braun, Aspen Comics has also announced their final wave of new releases for their 15-Year Anniversary campaign. The Aspen Wave 3 titles follow the publisher’s anniversary year pattern of bringing back classic series such as their top selling Michael Turner’s Fathom and Executive Assistant: Iris while debuting new properties throughout 2018. Wave 3 kicks off with Aspen’s flagship title, Michael Turner’s Soulfire:

Awaken Skies, an all-new title from Aspen created by Frank Mastromauro with art by Marco Lorenzana and Justice releases in August with a zero available on June 13th. Solicitation copy for Awaken Skies #0 reads:

A new world of flight prepares to take the Aspen Universe by storm! In the Gothic Quarter of Barcelona, Spain, a covert scientist discovers that possessing valuable data that could change the world comes with a dangerous price. However, it may be far too late for him to escape before the powers that be come to collect! Meanwhile, on the other side of the world, a loving suburban family makes a similar discovery, that the world is indeed much smaller than it seems, and no one is safe! 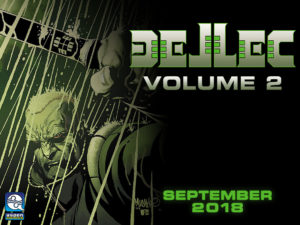 Aspen’s supernatural action-adventure series Dellec returns for a second volume in September following the character’s recent appearance in the Aspen series No World.

Created and written by Frank Mastromauro and Vince Hernandez, the publisher will release official solicitation copy and more details soon.

Artifact One, a brand new action-adventure series from creators/writers Vince Hernandez and J.T. Krul and illustrated by Romina Morinelli, debuts in October with a zero issue available on August 22nd. 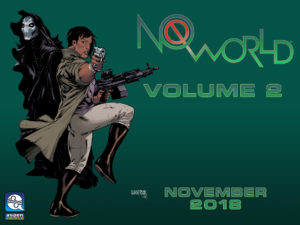 The hit 2017 series No World returns for a second volume in November from writers Scott Lobdell (Happy Death Day, Red Hood and the Outlaws) and Blake Northcott (Michael Turner’s Fathom) with art by Giuseppe Cafaro (Fathom: Kiani, Santeria: The Goddess Kiss). The No World title unites many of Aspen’s most popular characters in one action-adventure series with a rotating cast each volume. Aspen will release official solicitation copy and more details soon.

Aspen Comics is an entertainment publishing company founded in 2003 by superstar comic book artist, Michael Turner. In addition to producing their own line of hit titles including Fathom, Soulfire, Executive Assistant: Iris, Lola XOXO and more, Aspen has joined forces with some of the industry’s most notable companies on their best-selling titles. Aspen’s collaborated with Marvel, DC Comics, NBC, Gale Anne Hurd’s Valhalla Entertainment, Axe Body Spray, American Express and more. In 2018, Aspen Comics is celebrating their fifteen-year anniversary and has joined forces with powerhouse entertainment moguls David Maisel and Scooter Braun in collaboration with their founding of Mythos Studios, currently developing Michael Turner’s Fathom and Soulfire for film and other multimedia projects.