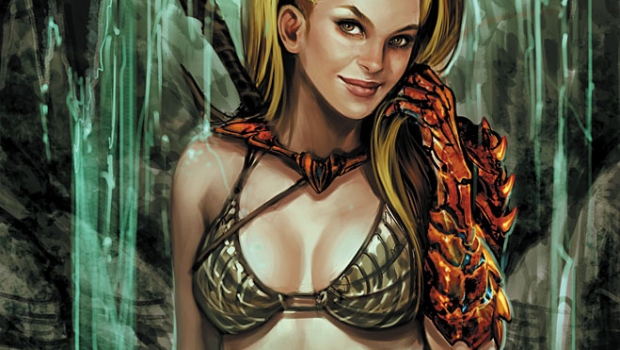 The publisher will be offering two new comic exclusive releases at their booth this weekend, Lola XOXO #1 (Limited to 500 copies) and Fathom: Kiani #1 (Limited to 200 copies), both of which feature WonderCon 2014 exclusive covers by Siya Oum. Fans can get their copies signed by Oum at the Aspen Comics Booth #601.

Fans that visit the Aspen Comics Booth #601 throughout the weekend will also be treated to the publisher’s largest-ever free giveaway, featuring over 25,000 free comics over the course of the con weekend.

On Saturday, Aspen creators will be appearing in the Official Aspen Comics Panel 2014 in Room 208 at 2:30pm to reveal looks at their upcoming new titles including Lola XOXO, Jirni Volume 2, Damsels in Excess, The Zoo Hunters and more. All fans in attendance will receive a free gift courtesy of Aspen Comics, following a special one-on-one Q&A with fans.

Also, on Saturday from 4-5pm, the publisher will be hosting a special “Free Sketch Hour” for fans featuring popular Aspen cover artists Ale Garza and Oliver Nome. Aspen encourages fans to arrive early, as this event will be first come-first serve only.

Editor-in-Chief Vince Hernandez will be holding the Aspen Comics Portfolio Reviews in Room 206B from 1:30-2:30 on all three days of the con, and Aspen strongly encourages those looking to get reviewed to arrive, early as spots are limited to one hour.