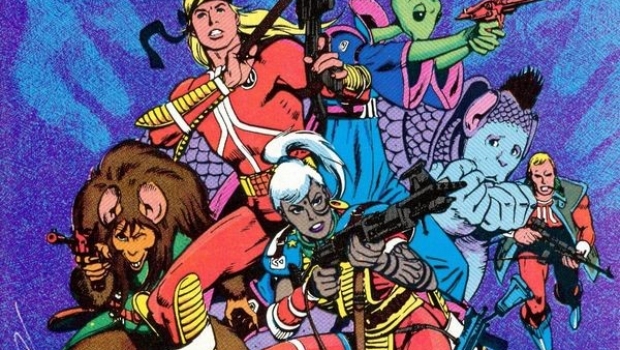 Dynamite is very proud to announce a collaborative publishing agreement with Atari®, one of the world’s most recognized publishers and producers of interactive entertainment. The deal includes rights for a comprehensive retrospective hardcover book, collecting game production and concept artwork, photos, behind-the-scenes info, marketing art, other details on the company and its games, and interviews with key people involved in Atari’s rich history. The deal also includes the right to create original comics and graphic novels in all sizes, as well as reprint existing comic material.

“We are excited to be teaming up with Dynamite Entertainment to bring a modern twist to a classic series of comics and table top books that are rich with historic art,” said Fred Chesnais, Chief Executive Officer, Atari, Inc. “Atari’s roots in the comic book world and iconic art is a collector and video game enthusiast’s dream. Our partnership is a fun way to expose our brand to a new generation and resonate with our long-time fans.”

Atari was originally founded in 1972 and was a pioneer in arcade games and home video game consoles. The company’s products, such as Pong® and the Atari 2600 helped define the electronic entertainment industry from the 1970s to the mid-1980s, and beyond.

“Atari is a touchstone for so many people,” says Dynamite Director of Business Development Rich Young. “Their games and game system exposed a lot of folks to video games for the first time…and frankly, got them hooked! I have fond memories of playing games on the 2600 with friends growing up, and am quite happy that we have a chance to work with Atari on this publishing program.”

Dynamite Entertainment’s Atari’s art book, comic books, and graphic novels will be available to consumers through the comic book specialty market, and the graphic novel collection will be available at major bookstore chains, online booksellers, and independent bookstores courtesy of Diamond Book Distributors. Atari comics will also be available for purchase through digital platforms courtesy of Comixology, Dynamite Digital, iVerse, and Dark Horse Digital. Fans and retailers are encouraged to follow Dynamite Entertainment and Atari’s official social media channel for the latest updates regarding creative teams and release dates.