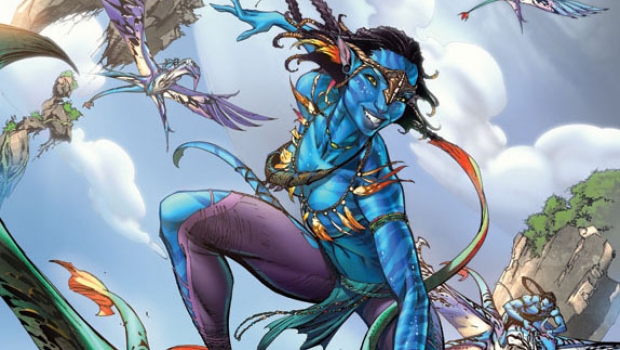 It has been a LONG wait for the fans of James Cameron’s movie AVATAR after seeing that amazing J.Scott Campbell image many years ago. Finally the wait is over and Cameron himself announced a comic book series comics that will cover “the time before, during, and after the events of the original ‘Avatar‘ film.”

Dark Horse was named the publisher of this new series as Cameron mentions a long-lasting relationship with the publisher with franchises Terminator, Aliens and The Abyss.

Although Cameron couldn’t make it to the Big Apple, he recorded a special video message that was shown at the panel this morning. Watch it exclusively on EW here.

Below is the official Dark Horse promo. To the right is the JSC-image from 5 years ago, colored by Nei Ruffino, created “in an effort to attract the license to produce comic-books based on James Cameron’s AVATAR”.