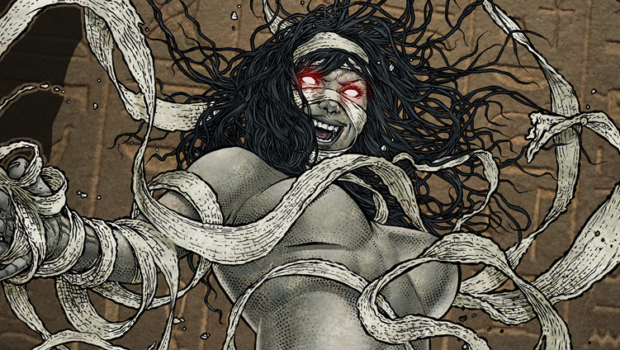 Since the success of his Sisterhood-project, creator Richard Boom has been going a tad crazy and even set up a small new project, with part of the profits going to the charity organization HERO INITIATIVE.

As he states: “I am so very pleased how this first attempt at crowdsourcing is going, so I am stepping it up a notch and will vouch to make a donation to HERO INITIATIVE and if we reach STRETCH GOAL #1 at the MAKE 100 Project then it will even be 50% of all profits.

And to be completely bonkers, I vouch to DOUBLE the orders at MAKE 100 for FREE if I reach Stretch Goal #2.”

Answering the question as to what inspired him to do this, Richard Boom (his real name, which means ‘tree’ in his own language) explained it was all about a certain creator, who was very active about Hero Initiative last year: “I have been seeing folks like the master of horror, Dan Brereton (get his Hero Initiative NOCTURNALS book here), contributing to this cause and it struck my heart every time. And I vowed that if I could do something for this organization, I would!

So in the past I have made sure some artists (eg Boo Cook) at the FACTS-convention in Belgium would have a jar for donations.

So with the “Kickstarter Make 100” option, it would only make logic to do this, especially since this 100-project will piggyback on the last project.”

WHAT IS HERO INITIATIVE?

“The Hero Initiative creates a financial safety net for comic creators who may need emergency medical aid, financial support for essentials of life, and an avenue back into paying work. Since inception, the Hero Initiative has been fortunate enough to benefit more than 50 creators and their families with over $950,000 worth of much-needed aid, fueled by your contributions! It’s a chance for all of us to give back something to the people who have given us so much enjoyment. ” Source and click to read more.

Folks like Mark Waid, Stan Lee (RIP), Howard Chaykin, Brian Pulido, Joe Quasada, John Romita, George Pèrez and more have been a huge part of this organization and are an inspiration as well as great folks all around.

BAD is abbreviation of the name ‘Boom Art Department‘, a small art agency run by Richard Boom and where he has been developing his SISTERHOOD-comic. As the synopsis reads “For several centuries the ancient Order of Justice has lain dormant, but the magical power of the Justice Gems has been released during an Egyptian archeological dig – now, all over the world, the mummified Priestesses of Justice are coming back to life. As supernatural evils threaten human society through the following decades, the Sisterhood will be there to guard and protect” and with the help of talented A-listers like Greg Capullo, Bud Root and Eric Basaldua on covers the comic “went BOOOOOMMMM” as Richard likes to say!

Kickstarting A Comic: the dream, the hardship, the team, the fails, the tribulations and more… →