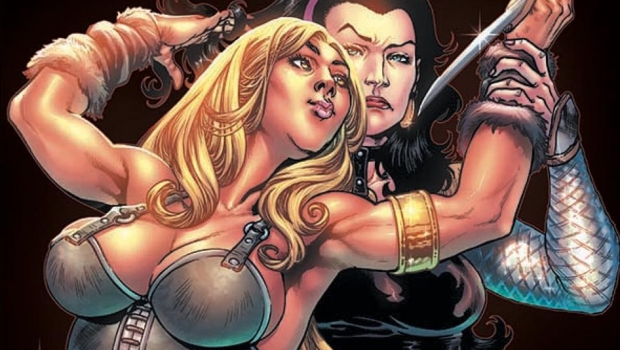 Rising from a watery grave, Belit once again finds herself commanding a ship, sailing the seas in search of adventure…and answers. But when a deal goes wrong, she finds herself teamed up with the woman she was holding prisoner: the equally beautiful and deadly Valeria.

These two iconic characters will find themselves traveling across Hyperborea on a mission to find out how Belit lives once again that will lead them straight into danger…from the gods themselves! Bonus material includes the original Robert E. Howard essay, “The Hyborian Age.”

Writer Max Bemis said, “I’ve always been a fan of the ‘riskier’ side of fantasy; from DarkSouls and the Witcher to Gaiman or the Princess Bride, I love fantasy that fcks with you. Some of the first risky fantasy I truly devoured were comic book adaptations of Howard’s work, and I’ve never seen his ideas look as beautiful then they do at Ablaze. They’re taking steps further by allowing some voices from the great writer’s universe to speak for themselves; specifically, two that are decidedly not that of the decidedly pectoral Cimmerian school of choppery, Howard’s two most bad-ass heroines. Think of this as Lethal Weapon a la Game of Thrones, and you have a hint of the weirdness we’re cooking up. I’m honored to be given the reigns for these girls’ first journey and promise it will fck with you from page one.”

BELIT & VALERIA will be available in print and digitally.