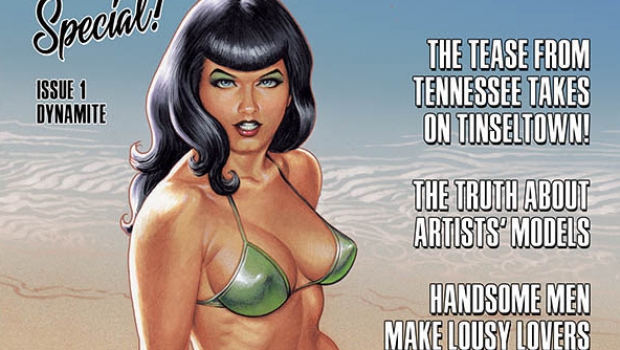 Bettie Page Returns in New Series from Karla Pacheco: The Tease From Tennessee Takes on Tinseltown

Bettie Page is back and better than ever, with a new alternate history twist making her a true Hollywood star in the making – and suspect to a murder!

“Bettie Page has always been a huge idol for me. Not just for her iconic style, but the way she brought such a sense of joy and delight to her performances and sensuality,” said writer Karla Pacheco. “We’re taking Bettie Page’s amazing spirit, and imagining a timeline where she was finally given the chance to reach her full potential as a star – even though it’s far from smooth sailing! We’ve got twists, turns, secrets and lies – the whole shebang! Plus we have Vincenzo, Rebecca and Becca all coming together to create a drop-dead gorgeous, colorful dream of a book! It’s brassy, bold, (frequently criminal) fun, and I think it’s going to be a really exciting adventure for both readers and “our” Bettie.”

Artist Vincenzo Federici added, “Being on this book is simply… incredible! When I was a teen, I totally fell in love with Bettie as an icon. Now I have the opportunity to work on her stories and with Karla, one of the coolest writers in the industry! I know it will be a challenge because we have a lot of characters and maybe a lot of elephants (Karla says!), but I’m taking inspiration from my idol Alan Davis, a master in stories full of characters. It’s super fun – guaranteed!”

“I’m extremely excited to join on this new adventure with Bettie,” said colorist Rebecca Nalty. “She’s had a major influence on pop culture for decades, but it’s in both her image of pure, confident sexuality and the reality of her real life personal struggles where I think the world found our love for this woman who broke all the rules to be herself.”

In this series, Bettie has moved from New York to Hollywood sometime around 1954. She’s transitioned into more minor acting working, with theater success and bit parts in B-movies. Though she’s still challenged navigating the sticky swamp of producers, perps, pumps, and pushers who call La La Land home and want a piece of the pie – and Bettie. The question is – does Bettie Page find trouble, or does trouble find her? Signing on for a supporting role in a “tastefully sensual” fantasy film set on an idyllic tropical island, she’s wrapped up in a new environment and colorful cast of characters. Until someone is murdered and a massive storm hits!

This new series weaves together inspiration from dusty, dog-eared Hammett and Chandler novels, the breezy feel of vintage “LOOK” magazines, classic episodes of Murder She Wrote, the salacious naughtiness of Hollywood gossip rags and even Ed Brubaker and Darwyn Cooke’s Catwoman!

Editor Nate Cosby (Red Sonja, Thor: The Mighty Avenger) puts on the bow with, “Who doesn’t love a whodunnit? The team has concocted a killer conceit and is knocking it out of the park. If you loved Knives Out, you’re gonna adore this!”

For such an iconic woman, a crop of all-star artists are contributing covers! Junggeun Yoon (Spider-Woman, Black Widow) leads the pack, joined by Kano (Superman) and of course the legendary Joseph Michael Linsner (Dawn, Red Sonja). Riki Le Cotey marks a first with a cosplay cover. The real-life Bettie herself is featured on two photo cover variants, one nice and one naughty. Plus a slick homage to Frank Miller from Stephen Mooney (Grayson).

BETTIE PAGE #1 will be solicited in Diamond Comic Distributors’ April 2019 Previews catalog, the premier source of merchandise for the comic book specialty market, and slated for release in June 2020. Comic book fans are encouraged to preorder copies of the issue with their local comic book retailers. It will also be available for individual customer purchase through digital platforms courtesy of Comixology, Kindle, iBooks, Google Play, Dynamite Digital, ComicsPlus, and more!