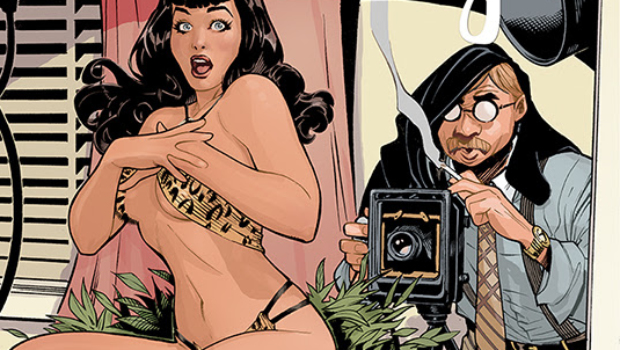 In life, Bettie Page was the undisputed queen of the pin-up. Her legacy has lived on through comic books for decades. In March 2019, Dynamite is celebrating with a special 32-page one-shot showcasing all the beautiful covers from the Dynamite comics.

Bettie Page is an icon and an influence the world over, not only to strong women, but also to creators including the painter Olivia, and in the comics market none so famously as Dave Stevens. Dave’s influence for Betty in The Rocketeer is entirely based on Bettie Page. And Dave created a very iconic scene of Betty with a photographer for a pin-up shoot. Before, and moreso since then, Bettie has inspired comic book artists and fans all over. Since 2017, Dynamite Entertainment has brought fans the newly declassified super spy adventures of the globetrotting Bettie. Cleverly written by David Avallone (Elvira Mistress of the Dark) and a talented gang of artists including Julius Ohta (Sherlock Holmes: The Vanishing Man) in the just launched ongoing series available now.

Though the stories and art inside of the comics are always what keep fans coming back to their favorites every month, sometimes you can judge a book by its cover. Fans have been gushing about the gorgeous covers that grace Dynamite’s Bettie Page issues. Such as Terry Dodson’s “reverse homage” for the first issue of the miniseries, drawing Bettie herself in the same situation as the Dave Stevens classic, bringing everything full circle.

Other spectacular artists featured in Bettie Page: The Dynamite Covers include Joseph Michael Linsner, Scott Chantler, and J. Bone. Altogether reprinting over 20 covers, including some photo gems of the timeless Bettie herself.

“Bettie is a true icon, and to have this much incredible art – rendered by the best artists working today — in one place is a true gifts for the fans,” said Dynamite executive editor Joseph Rybandt.

Bettie Page: The Dynamite Covers will be solicited in Diamond Comic Distributors’ January 2019 Previews catalog, the premier source of merchandise for the comic book specialty market and slated for release in March 2019. Comic book fans are encouraged to preorder copies of the issue with their local comic book retailers. It will also be available for individual customer purchase through digital platforms courtesy of Comixology, Kindle, iBooks, Google Play, Dynamite Digital, iVerse, Madefire, and Dark Horse Digital.