Comics luminary Bill Willingham (Fables, Legenderry) dips his toes and his pen into the rich world of Edgar Rice Burroughs with news of an all-new limited series featuring Tarzan, Korak, James Carter, Dejah Thoris, and more: The Greatest Adventure! Previous Warlord of Mars artist Cezar Rezak joins Willingham on the planet-hopping series grand enough to have come from the mind of Burroughs himself!

A crash landing reveals a secret plot by a mysterious cabal of scientists to weaponize Jason Gridley’s famous wave, turning it into a disintegration ray that can bypass distance, on a galactic scale, to destroy a single person, or even an entire world at a time. Gridley seeks the help of Tarzan and Jane to stop these villainous adventurers from finding the final piece needed to fulfill their devious end. When Tarzan puts the word out to assemble a crew to man Jason Gridley’s Martian Flying Ship, the galaxy’s greatest fighters and adventurers come together to stop this evil plan.

“Here we are with my chance, at long last, to play in the very fields that Burroughs created, and to marry my two loves of comic book and prose fiction in doing it,” says Bill Willingham. “One comic series couldn’t possibly contain everything I’ve loved and discovered in his books. The Greatest Adventure contains everything I love that I could fit into a single series, including his most popular characters, as well as many obscure ones, which are nevertheless beloved to me.” 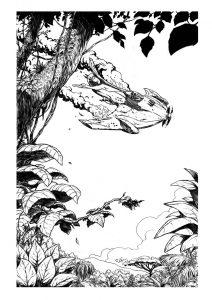 “Bill Willingham is a master of weaving together characters to tell a masterful story, pulling together multiple worlds and timelines,” says Dynamite CEO and publisher, Nick Barrucci. “To have him tackle John Carter and the other characters of literary master Edgar Rice Burroughs with the help of Cezar Rezak is truly a matchup that every comics fan should be as excited to read as I am! This truly may be the ‘Greatest Adventure’ yet!”

Bill Willingham is the American writer whose career can be traced back to the 1980’s breakout series Elementals, and has since included notable work for DC’s Vertigo imprint, including a 13-year run on the critically acclaimed Fables, bringing together notable characters from fairytales and folklore. Willingham’s previous work for Dynamite includes the steampunk crossover, Legenderry, featuring some of the company’s most well-known characters.

The Greatest Adventure will premier in 2017, with further details to be announced in the coming months.

PS: the colored image is purely clickbait (hihi) since a colored image was not provided. And this looked perfect as Tarzan with Dejah… although this is actually La of Opar. Image courtesy of master Joe Jusko, by the way.