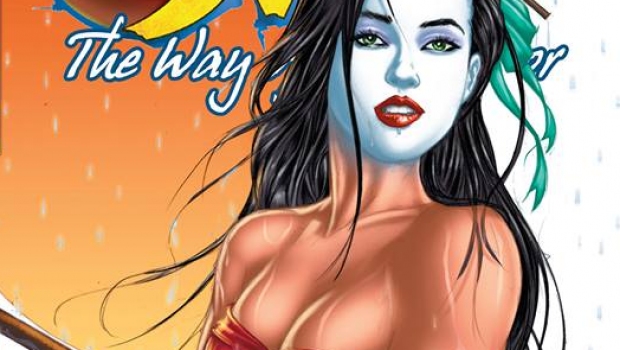 It was 1993 that Billy Tucci, armed pages of “Shi – The Way of the Warrior #1” tucked into his portfolio, first stormed the floor of the Comic Con International in San Diego with dreams of drawing for Marvel Comics.

Problem was, that aside from Lady Death creator and budding Chaos! Comics publisher, Brian Pulido (who graciously contracted pin up work), no one was interested.

Not to be deterred, Tucci vowed to take the “Shi” pages and turn them into his own self-published comic book.

After twenty SDCC’s and 3 million copies of “Shi” in print, Tucci is returning to the place where his dreams of comic book stardom were initially crushed. Now, as an exhibitor, he’s offering a host of celebration exclusives.

“We haven’t had any Comic Con exclusives since 1994.” Tucci explained, “and I cannot believe it’s been twenty years, but reminiscing about trying to break into the industry and the memories of San Diego’s since have really inspired me. These books will be the pathfinders to my self-publishing Shi again in 2014!”

Crusade’s San Diego Comic Con Exclusives
“The Shi – Way of the Warrior #1” SDCC 20th Anniversary edition – signed, numbered and remarked by Billy Tucci. Limited to only 99 editions
“The Shi – Way of the Warrior #1” SDCC 20th Anniversary Sketch Cover Edition – signed, numbered and limited to only 25 editions. Each edition includes a full color cover illustration by Billy Tucci
The “Shi – Sketch A Story” Sketchbook. Limited to 99 editions, with each one signed, numbered editions. Each book will include an original “first panel” sketch by Billy Tucci on page one. The recipient can then “ take it from there” and can commission their favorite artists to continue a fantastic one-of-a-kind story, as original as the chosen artists’ imaginations!

And speaking of Lady Death creator Brian Pulido, he and Tucci will offer the 2013 Comic-Con Exclusive Lady Death VS. Shi Premiere Sketch Card Series by 5Finity! Limited to only 300 packs each featuring one “premium sketch card” per pack.

Comic Con 2013 will also see the San Diego debut of Tucci’s critically acclaimed Christmas story, “A Child Is Born” Hardcover edition and the world premiere of his newest graphic novel, “Roll Hard” based on NY Times Best Selling author Robert Young Pelton’s “Licensed To Kill” about the brutal over-looked real war in Iraq as told through the eyes of civilian contractors..