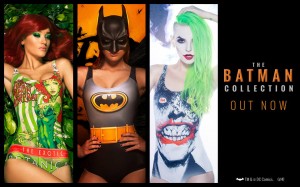 Australian label Black Milk is famous for their nerd and geek-printed dresses and more and Black Milk now launches their Batman-inspired collection.

Clothing is directly inspired by the most popular characters of the Bat -Universe (including gorgeous girls like Harley Quinn, Catwoman and more of course!) and shows artwork from famous artists like Jock, Dodson, Bolland and Neal Adams!

A feast for our eyes … as well as a party for the cult-loving girls!!