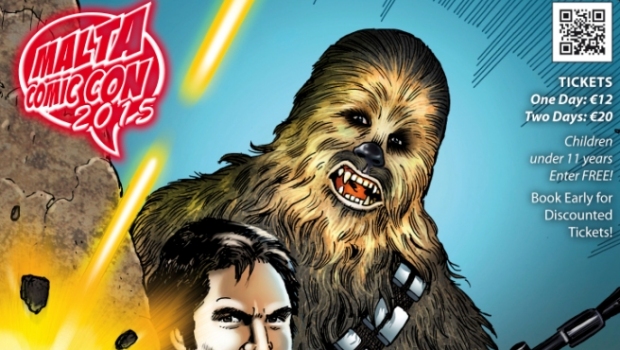 As the excitement leading to the 7th edition of the Malta Comic Con continues to build Wicked Comics are proud to announce that internationally renowned creators Tim Perkins (Worlds End Vol 1 – The Riders on the Storm), Boo Cook (Elephantmen) and Mike Krome (Shahrazad) as well as the acclaimed independent creator Heba Rena Yassin (Kokoro) will be joining Jon Haward (Tales of the Buddha before he got Enlightened),Simon Davis (Sinister Dexter),Sabine Rich (Lady Mechanika) and John Freeman (Doctor Who) as guests for the Malta Comic Con 2015 which will be held on Saturday 5th (10am-6pm) and Sunday 6th (11am-7pm) December 2015 at the Magazino Hall/Old Power House, Valetta Waterfront.

“My yearly invitation to take part in the best Comics Convention on the planet is the highlight of my convention schedule. Long may Malta Comic Con continue to spread the word about Comics and all things Maltese” said Tim Perkins who this year will once again be holding the popular Children and Parents Comic Art Workshops during both days of the show. Boo Cook also expressed his delight at being invited to the Malta Comic Con when stating “For a long time I’ve wanted to visit Malta for it’s amazing scenery and rich historical (and pre-historical) value so i’m totally thrilled to be a guest at this year’s Malta Comic Con where I get to combine all that with the massive bonus of comics!”

Tim Perkins is an award winning comic illustrator and writer and now graphic novelist based in England and has worked for over 30 years on comics as diverse as Dark Dominion, Transformers, Thundercats, Doctor Who, Judge Dredd, Dreamstone, Earthworm Jim, And Hot Wheels for such illustrious giants as Marvel, DC, 2000AD, Defiant, and Tekno, amongst a great many others.
He also works as a concept artist, designer and writer in the worlds of themed rides and attractions and animation, as well as lecturing about comics, storytelling and creativity. He is also founder and lecturer on the Fantasy Art Unlimited art course and is company director of Wizards Keep Publishing, the publishing imprint of Wizards Keep Limited.
His “Science Fusion” graphic novel Worlds End – Volume 1 – The Riders on the Storm is the first major publication from the company.

He is currently producing the artwork for the second volume, Worlds End – Volume 2 – A Hard Reign’s Gonna Fall.

Artwork from this second volume will be on show at this year’s convention along with the hard backed copies of the first volume, the Worlds End Colouring & Storybook and Volume 2 Ashcan, containing some surprises for Maltese fans for sale. This year Tim is launching his Retro-Collection of The Dinoswords – collecting the 12 issues previously printed in the UK, 1990’s anthology comic, Triffik and now including additional material such as previously unpublished issues.

Boo Cook is known for working on 2000AD characters such as Judge Dredd, Judge Anderson Psi, ABC Warriors, Harry Kipling, Asylum and currently Blunt for the Judge Dredd Megazine. He is also known for working on Elephantmen, Doctor Who and various Marvel covers. Aside from his work in comics Boo also plays the drums in experimental synth band Motherbox.

Mike Krome is a freelance artist from the UK who has worked on projects varying from children’s books, to magazines, book covers, and computer games. He now specialises in comics, penciling series such as Ancient Dreams, Southern Nightgown, Shahrazad, and sci-fi series Crysallis, as well as being a cover artist for Aspen, Zenescope, Big Dog Inc., Rothic, and BlueRainbow.

Heba Rena Yassin is a 22 year old creator from Limassol, Cyprus. She graduated First Class in BA Fine Art from the University of Hertfordshire, United Kingdom and is currently doing a Masters degree in Digital Art and Design at the University of Nicosia. As long as she can remember Heba has always had a passion for comics, books, anime and manga. She purchased her first graphics tablet when she was 14 and has been creating her own stories and illustrations ever since. Experimenting in a variety of styles the majority of Heba’s current work is digitally created, and she finds her background in Fine Art enables her to apply techniques to her digital work. Her debut comic (which she will be presenting during Malta Comic Con 2015) is the manga styled Kokoro; an exciting tale of adventure, sympathy, and a powerful friendship that can make miracles happen!

Over the years Jon Haward has worked on many icons such as Spiderman, Judge Dredd, Dan Dare, Macbeth, Warhammer, Teenage Mutant Ninja Turtles, Shinobi and Mutant Chronicles amongst others. During the past two years Jon has been passing his knowledge to the next generation of artists by mentoring students in colleges and universities as well as providing home tutoring. He also co-created and is currently working on new material for the critically acclaimed Tales of the Buddha before he got Enlightened which consists of adult humour strips collected and published in trade paperback format by Canadian publisher Renegade Arts Entertainment.

Simon began working in comics in the early 90’s, mainly for the always wonderful 2000 AD. Among the many characters that he has drawn for them, he is probably best known for his work on Sinister Dexter with Dan Abnett, Stone Island, and Ampney Crucis Investigates with Ian Edginton, and Black Siddha and Slaine with Pat Mills.

He is currently knee-deep in blood, iron and paint completing ‘Psychopomp’, the third instalment of Slaine: The Brutania Chronicles.

A self-taught artist Sabine grew up all over the world. She began her professional career in comics with Rothic as colourist for Ancient Dreams, and has since worked on all Rothic products. Theory of Magic is a world of fairies which she pencils, colours and co-designs. Since her launch with Rothic in 2011 she has worked with Blue Rainbow, Aspen; Zenescope; Lady Death Universe; and Lady Mechanika.

Amongst other things at the Malta Comic Con 2015 Sabine Rich will be promoting her latest book “Sirens of Art” a 48 pages of full colour A4 sized art book featuring a collection of her best work ranging from covers, commissions and personal creations illustrated in an assortment of pencils, watercolours, copics and digital mediums.

John Freeman is a writer, editor and creative consultant based in Lancaster, England. By day, he is currently editor for ROK Comics part of ROK Global, currently, publishing a number of audio comics for mobile devices (Apple and Android) including Team M.O.B.I.L.E. and The Beatles Story, the latter drawn by Arthur Ranson and first published in the British weekly Look-In in the 1980s.

By night, he is editor of downthetubes.net, a web site devoted to British Comics news and features web site that began back in 1999. He also works as a specialist PR advisor and copywriter for organisations such as the Lakes International Comic Art Festival (16th-18th October 2015!) and Lancaster Comics Day (Sunday 5th June 2016).

He is currently writing the online SF adventure strip “Crucible” and working as creative consultant on the new Dan Dare audio drama series in pre-production from B7 Media, as well as scripting new adventures for a famous British national newspaper strip comic character that should launch in October or November 2015.

“This will be Tim’s 7th appearance in as many Malta Comic Cons and we wouldn’t have it any other way! On top of being a bona-fide talented and delightful person Tim has played a crucial role in both the development of the Malta Comic Con and perhaps more importantly in the development of the Maltese Comic Scene. For this we thank him and offer our eternal gratitude. We’re also excited to welcome Cook, Krome and Yassin whose exceptional talents will delight attendees and add to the magical experience of the Malta Comic Con” said Chris Le Galle co-founder of Wicked Comics.

“Besides being an incredibly talented artist Jon Haward is also an amazing person, and we feel privileged that he not only accepted our invitation to return to our convention but also magnificently designed our poster” said Chris Le Galle co-founder of Wicked Comics. Jon Haward responded by stating “Looking forward to the Malta Comic Con one of the best conventions I attend, great crew and great fans!” Wicked Comics’ President Fabio Agius concluded with “We’re also excited to welcome Davies, Rich and Freeman and cannot help but feel proud that they’re bringing their unique and distinctive talents to our show.”

Eric Basaldua Invites You to the Batman/Catwoman wedding! →