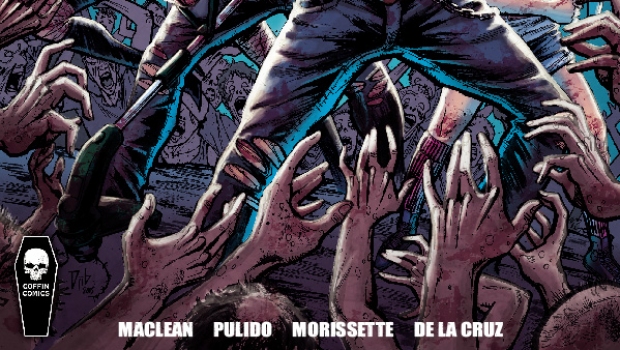 From the twisted minds of Brian Pulido and Mike MacLean comes the rise, fall and redemption of an American original, Zack the Zombie Exterminator

A year ago, Zombies started rising here and there. We expected the apocalypse. Instead, we got… pests. Zack Zander is a redneck, metal head with a talent for zombie-splatting. And his whole family gets in on the action. Together, the Zanders make up Z-Gone, “semi-professional” zombie exterminators. And they showcase every second of gory mayhem on YouTube.

Now, Zack has one chance to make things right. And all he has to do is kill a horde of flesh hungry zombies and a stop the god of Death from destroying the world.

“It’s like Wayne’s World meets Dawn of the Dead,” says co-creator Brian Pulido. “The horror is real, but the character’s reactions are where the comedy lies.”

The graphic novel campaign is live on Kickstarter now. Here is the hyperlink: Zack

“We all love AMC’s The Walking Dead. Week after week the show delivers gut-wrenching drama, dangling its characters over the brink of extinction. It’s thrilling, thought-provoking, and… utterly depressing. That’s not Zack,” says Mike Maclean. “Simply stated, Zack the Zombie Exterminator puts the fun back into zombie-splatting.”