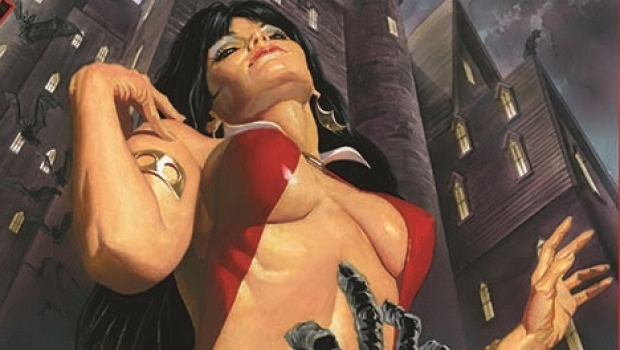 Dynamite announces the first of many collections compiling Christopher Priest’s redefining run on Vampirella, due out in April.

Titled Seduction of the Innocent, this first trade paperback will collect issues #1-6 as well as the Free Comic Book Day 2019 #0 that kicked off the 50th-anniversary celebrations. Join writer Christopher Priest (Black Panther, Deathstroke) and Turkish artist Ergün Gündüz for their “Kelvin Universe” or Netflix-inspired take on the Daughter of Drakulon. Opening in media res and moving along the timeline, as only a Priest written tale can nail, the series serves a perfect jumping-on point, pushes countless new ideas to the forefront, while also subtly pulling pieces from across Vampi’s five glorious decades. Nuns with guns, scandalous love triangles, psychotherapy, and every classic villain teaming up against our heroine, and it all centers around a mysterious, tragic plane crash!

“This book has been a remarkable surprise for me, the most fun I’ve had in years, thanks mainly to the sheer genius of Ergün Gündüz, whose vivid imagination and abandonment of the superhero house style in favor of Euro-animation has not only added enormous depth to my questionable writing but has inspired me to even deeper explorations of nonconventional creative approaches to a classic character who has most certainly been-there-done-that,” said Christopher Priest. “For Vampirella’s 50th we are shaking up the Etch-A-Sketch, breaking every rule Dynamite will let us break, yielding a fun and poignant work that’s greater than the sum of its parts. I’m genuinely excited and energized to explore this character, redefining her voice as Vampi begins her next 50 years.”

Ergün added, “I hope fans enjoy this book, as they read this deadly gorgeous lady’s thrilling adventures and marvel at these dozens of variant covers by all-star artists”

“This retooling of Vampirella for her big anniversary had to be perfect and lead the pack for a strong year also being Dynamite’s 15th anniversary,” said Nick Barrucci, Dynamite CEO and Publisher. “Priest was the right choice and we can’t imagine being any happier with how the book has turned out – but we’re definitely happy about the critical and sales success it’s seen! This is a perfect graphic novel for fans to return to and for newcomers who missed the issues to try out.”

Clocking in at 160 pages, the tome will include a bounty of bonuses. Christopher Priest will be providing an introduction, as will artist Gündüz, and a special psychological evaluation of Ella Normandy written by Travis Langley, Ph.D. and J. Scott Jordan, Ph.D. (Batman and Psychology) in-character as Dr. Emmanuel Jemison Lewis Chary. Topping it all off is an expansive cover gallery featuring the likes of Artgerm, Alex Ross, Adam Hughes, J. Scott Campbell, Frank Cho, Joe Jusko, Lucio Parrillo, Derrick Chew, Joshua Middleton, Terry Dodson and countless more!

Fellow creators and critics agree this Vampirella is not to be missed!

“This Vampirella is everything it’s supposed to be – sexy, bloody, exciting and shot through with dark humor – and yet like no Vampirella you’ve read before.” – Ron Marz (Green Lantern, Silver Surfer)

“Priest is at it again, taking a character we know and love and making us love her even more. A great introduction to readers old and new.” – Jimmy Palmiotti (Harley Quinn, Painkiller Jane)

“The book comes together seamlessly, making it a strong start for a new ongoing series starring a character that has seen decades of stories.” – ComicsBeat

VAMPIRELLA VOL 1: SEDUCTION OF THE INNOCENT will be solicited in Diamond Comic Distributors’ February 2019 Previews catalog, the premier source of merchandise for the comic book specialty market, and slated for release in April 2020. Comic book fans are encouraged to preorder copies of the issue with their local comic book retailers. It will also be available for individual customer purchase through digital platforms courtesy of Comixology, Kindle, iBooks, Google Play, Dynamite Digital, ComicsPlus, and more!