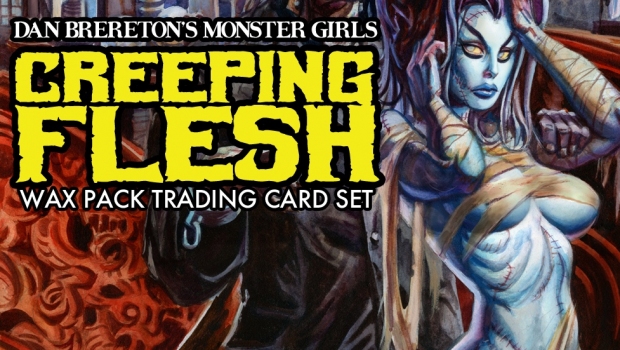 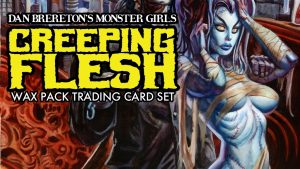 Each set will contain 19 retro picture cards and 1 sticker card, packaged in a hand-folded and heat-sealed wax wrapper. The cards and pack are printed entirely in the USA, and are designed to replicate the look and feel of classic trading cards from the 1960s and 70s.

The cards are printed on old school cardboard chip stock, and the wrapper coated in real wax; hold them in your hands and you’ll be instantly transported back to your childhood!

CREEPING FLESH will feature Brereton’s art of various monster girls, with accompanying stories on the back of each card by Brereton and Adam Levine of SideKick Lab, which is producing the set.

Today, SideKick has launched a Kickstarter crowd-funding campaign for CREEPING FLESH, with rewards including individual packs, the aforementioned Frankenstein print and autograph set, autographed metal cards, sketch cards and metal sketch cards. The campaign accepts pledges from anywhere in the world, and shipping in the U.S. will be free.

Dan Brereton, a 30+ year comic book veteran, is best known for his creator-owned comic book series, Nocturnals, and has written and illustrated stories for the biggest heroes in comics, from Batman, The Justice League, and Superman, to Spider-Man, Thor, and The Punisher!

The set is produced by SideKick Lab, who manufactured Topps’ Mars Attacks: Occupation trading card series, and Buff Monster’s Melty Misfits sticker cards, both of which were successfully funded on kickstarter.

This project is being run by Tom Lichtman, owner of SideKick, and Adam Levine, formerly of Topps. Both were responsible for running the Mars Attacks campaign, while Tom & SideKick handled both manufacturing and shipping/fulfillment for that project.