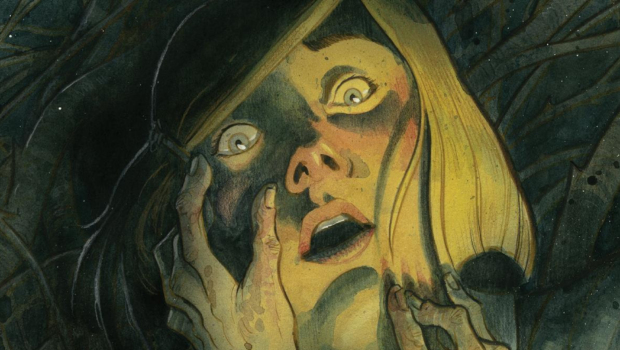 The end of Cullen Bunn and Tyler Crook’s gorgeous and ghastly horror epic Harrow County is imminent, but Dark Horse is ready to give the beloved series new life with a hardcover library edition!

Emmy always knew that the woods surrounding her home crawled with ghosts and monsters. But on the eve of her eighteenth birthday, she learns that she is connected to these creatures—and to the land itself—in a way she never imagined. Harrow County: Library Edition Volume 1 collects the first two volumes of Harrow County in a deluxe, hardcover, and oversized format with a new cover, sketchbook material, essays, “Tales from Harrow County” bonus stories by guest creators, and more!

Harrow County: Library Edition Volume 1 goes on sale October 24, 2018, and is available for preorder at Amazon, Barnes & Noble, and your local comic shop.

“One of the best horror comics I’ve ever read. Super creepy!”—Josh Williamson (Birthright)

“This is one of the best horror series I’ve ever read. It goes beyond the typical horror stereotypes and brings a deeper, more sophisticated kind of terror to the audience. This is definitely a series for all horror fans.”—Huck Talwar, ComicWow!TV