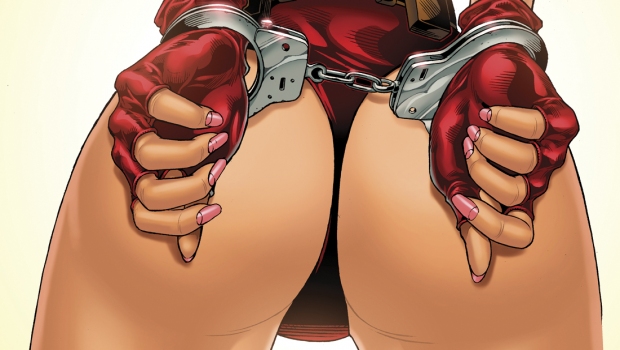 David Campiti, long-time Art Agent and owner of Glass House Graphics, shares his confessions of his love for the females in comics with C4S.

The first time I’d read a VAMPIRELLA comic from Warren, I was in high school; I was wowed by the sexy-but-realistic art by Enrich and by Jose Gonzalez. I also found myself appreciating Nestor Redondo’s art in DC’s RIMA THE JUNGLE GIRL. But my enjoyment of comic-book-babe art probably stems back to Dan DeCarlos and Stan Goldberg’s Betty and Veronica and, a little later, Gwen Stacy and Mary Jane from the pencil and brush of John Romita.

It’s funny, but when I was publishing comics at Innovation in the ’90s, many folks fan and professional thought of me as the guy who specialized in girlie comics. And yet reality didn’t bear that out. Four Anne Rice best-sellers, plus Beauty and the Beast, Dark Shadows, Quantum Leap, The Colour of Magic, The Shadow of the Torturer, On a Pale Horse, Nightmares on Elm Street, Child’s Play, Psycho, Straw Men, Justice Machine, The Group Larue, Overture, The Lunatic Fringe, Mangle Tangle Tales, Mack Bolan: The Executioner, and soooo many others. And not a girlie book among them.

Hero Alliance might’ve started it, though. When I’d discovered Bart Sears and put him on the book, he emphasized the tight outfits, indicating a hint of nipples for the first time I’d seen on a costume, as well as high heels. I decided I liked the look and continued it for the run of the book, even long after Bart had moved on. Cynthy J. Wood and I worked together on Legends of the Stargrazers, and it was indeed a sexy babes in space project. But with Dave Stevens having set the look, Adam Hughes doing the covers, and Matt Thompson and even Nestor Redondo drawing the interiors, how could it not? A short Bill Ward TORCHY reprint series, with cover paintings by Olivia, probably nudged things a bit.

Maybe the one that linked me forever to being considered a girlie publisher was our take on LOST IN SPACE.
Two things happened:
1.) What GOT us the series was my pitch to Viacom that we make LOST IN SPACE more sexy, more adult; and
2.) having Mike Okamoto on covers and Mark Jones on the first interiors. Mike brought a real pulp magazine feel to the covers, while Mark Jones couldn’t help himself with his female poses. Even though later artists didn’t do that with the interiors, the die was already cast.

Years later, I got to do the series EXPOSURE with artist Al Rio and JADE WARRIORS with Mike Deodato, both at Image; how could they NOT be sexy, with those guys at their respective helms? And then I married FHM lingerie model Jinky Coronado, herself a comics writer/artist, and she’s drawing both BANZAI GIRL and the EXPOSURE revival on keenspot.com — and both are delightfully girlie, just like her.

So I confess: I enjoy it, and love it, even though its only a small percentage of the thousands of comics I’ve worked on.

Incidentally, my EXPOSURE hardcover and softcover collection with Al Rio is now available online, so check it out!

David Campiti has been CEO and Global Talent Supervisor for Glass House Graphics from 1993 to present. Campiti founded and launched in 1986 the group of publishing ventures that later sold to Marvel Entertainment as “Malibu Comics.” In 1988, he founded “Innovation Publishing.” Under his control as Publisher and Editor-in-Chief, Innovation became #4 in the market share, below only Marvel Comics, DC Comics, and Dark Horse, as it brought to prominence many literary, film, and TV tie-in series and adaptations, such as Anne Rice’s THE VAMPIRE LESTAT, BEAUTY AND THE BEAST, DARK SHADOWS, LOST IN SPACE, Piers Anthony’s ON A PALE HORSE, QUANTUM LEAP, and many others. He was the first editor to publish an authorized Stephen King short story in comics in 25 years.

Over the years, Mr. Campiti was a writer or co-writer for hundreds of comic books, often illustrated by the artists that he discovered. In 1993, he resigned from Innovation to launch Glass House Graphics — a professional service firm that provides development and organizational services as well as illustrators, writers, painters, and digital designers — where he holds the position of CEO and Global Talent Supervisor. He has also served as a Consulting Publisher of MAD Magazine in Brazil and has been a columnist for several publications.

Today, in addition to writing comics as EXPOSURE and JADE WARRIORS and such books as STAN LEE’S HOW TO DRAW COMICS and THE MARVEL ART OF MIKE DEODATO, JR., Mr. Campiti oversees two Glass House Graphics offices in Brazil; one in Manila, Philippines; one in New Delhi, India; two locations in Indonesia, and one in Europe — coordinating creative services from a roster of more than 120 talents worldwide to produce animation, art, and digital graphics for scores of clients.