Death Sentence is the game-changing post-superheroic statement by writer Monty Nero and artist Mike Dowling (2000AD, Rex Royd).WHAT WOULD YOU DO WITH SUPERPOWERS – AND SIX MONTHS TO LIVE?
That’s the dilemma facing three people who’ve contracted the G+ Virus, through unprotected sex.What can graphic designer Verity, failing indie guitarist Weasel and roguish media personality Monty do in the time they have left? Fade away – or go out in a blaze of glory?By turns funny, dark, sad and spectacular, Death Sentence is an emotional thrill ride through celebrity, loss, passion and creativity. It’s the jaw-dropping next stage in superpowered storytelling!

Packed with unforgettable shocks, quotable dialogue and the character finds of a generation, this is an unmissable debut by two striking and confident new voices!

Death Sentence #1 hits stores on October 9, 2013.  The series will also be available to read day and date on the iPad, iPhone, Web, Android and Kindle Fire, exclusively through the comiXology app and comiXology.com 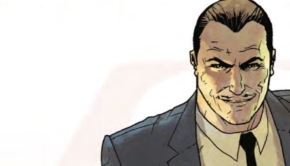