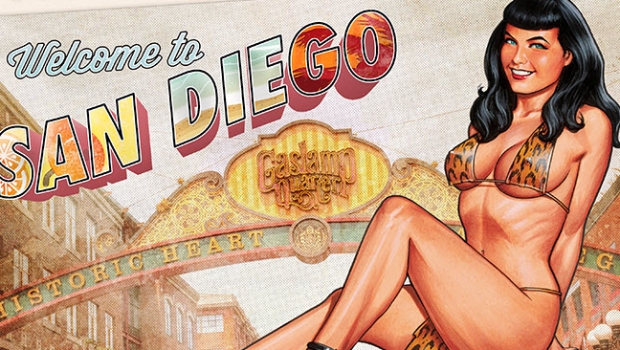 Diamond Comic Distributors is offering over 20 extremely limited PREVIEWS exclusives for this year’s Comic-Con International: San Diego (July 19-23). The list includes variants of several popular Marvel titles, including Secret Empire, Star Wars, and All-New Guardians of the Galaxy, a new 2018 The Walking Dead calendar just in time for the new season on AMC, a slew of Diamond Select Toys items, and more! Comic-Con attendees will be able to preview the items at the Diamond PREVIEWS Booth #2401 and purchase from participating retailers on the show floor. 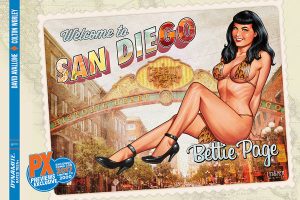 “Diamond is excited to present this year’s extremely limited con exclusives,” said Diamond’s Director of Marketing, Dan Manser. “We’ll showcase these items at the PREVIEWS booth and then guide fans to retailers who’ll have the exclusives available for purchase on the show floor. Fans who look forward to attending Comic-Con International: San Diego for the exclusives won’t be disappointed with this year’s selection.”

For more information and to pick up our one-sheet listing retailers on the show floor where you can purchase our SDCC PREVIEWS Exclusives, make sure to visit the Diamond PREVIEWS Booth #2401.

The next Power Rangers epic starts here! The Power Rangers are finally reunited, but can things ever be the same? (MAR178669) Limited to 3,000 copies.

She’s more modest than Ms. Blaise, but peels more than Ms. Emma. She out-vamps Vampirella, but she’s sweeter than Honey West. She put the mod in model, and the bangs in bang-bang. Now the world can know the truth: her classified adventures back in 1951 Hollywood have been declassified. Dynamite, David Avallone and Colton Worley are proud to present The Secret Diary of Bettie Page, in handy comic book form. (MAR178681) Limited to 2,000 copies. 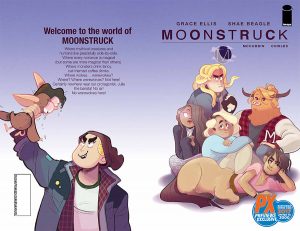 A NEW ONGOING SERIES from Lumberjanes creator GRACE ELLIS and talented newcomer SHAE BEAGLE that tells a story of monsters, romance, and magical hijinks! The first arc also includes an additional short story with artist KATE LETH! Fantasy creatures are living typical, unremarkable lives alongside humans, and barista Julie strives to be the most unremarkable of all. Normal job, normal almost-girlfriend, normal…werewolf transformations that happen when she gets upset? Yikes!But all bets are off when she and her centaur best friend Chet find themselves in the middle of a magical conspiracy. Will Julie and Chet be able to save their friends? Is Julie’s dogged determination to be normal a lost cause? Who’s going to watch the coffee shop while our heroes are out saving the world?? These questions and more will be answered in MOONSTRUCK, coming July 19 from Image Comics. (MAR178671) Limited to 3,000 copies.

ROBERT KIRKMAN’s THE WALKING DEAD is one of the most popular comics of all time. Show off your love of THE WALKING DEAD all year long with the new 2018 calendar featuring images from the comic, as drawn by artist CHARLIE ADLARD. (MAR178672) Limited to 5,000 copies.

Star-Lord has been sailing the radio waves of the galaxy for years, keeping up with the one piece of Earth he could never quite leave behind. Guest artist Chris Samnee joins writer Gerry Duggan to check into Peter Quill’s sonic conquests!

Remember the time Deadpool went a little TOO crazy and killed the entire Marvel Universe? Well, this isn’t that. This is a DIFFERENT time. Writer Cullen Bunn and artist DaliborTalajic (A.K.A. the creators behind DEADPOOL KILLS THE MARVEL UNIVERSE) have reunited for ANOTHER tale of Deadpool taking out all of your faves in the most horrific ways possible! It’s gonna hurt him more than it hurts you…and you’re gonna love it!Parental Advisory. (MAR178675) Limited to 5,000 copies.

SPIDER-MAN RETURNS TO THE FRIENDLY NEIGHBORHOOD! The webslinging, wallcrawling wonder returns to New York City in the all-new PETER PARKER: THE SPECTACULAR SPIDER-MAN. A companion series to the best-selling Amazing Spider-Man series, Peter Parker is going back-to-basics for big heroics in the Big Apple. Featuring adversaries old and new, be there as Spider-Man returns to his friendly neighborhood for his never ending battle against crime and the dreaded “Parker Luck”. Rated T (MAR178676) Limited to 5,000 copies.

They thought they were safe! They thought they could handle anything that was thrown against them! But the united heroes of the Marvel Universe never reckoned on the dread power that Steve Rogers would unleash! THE SECRET EMPIRE WILL AMAZE YOU! Rated T+ (MAR178677) Limited to 5,000 copies.

SDCC 2017 STAR WARS #33 B&W VAR
(W) Jason Aaron (A) Salvador Larroca(CA) Mike Mayhew
The Hero of the Rebellion & the Princess of the Revolution! Luke and Leia finally get some time alone. Unfortunately, it’s stranded on a desert island.Rated T (MAR178678) Limited to 5,000 copies.

The future is now, as the next Batman, Terry McGinnis, travels back in time to be the next exclusive bust in the DC Animated Universe bust line! Limited to only 850 pieces, this 6” bust comes in a full-color box with a hand-numbered certificate of authenticity. Sculpted by Varner Studios. A Diamond Select Toys product! (DEC168438) Limited to 850 pieces.

The future is now, as the next Batman, Terry McGinnis, travels back in time to be the next exclusive bust in the DC Animated Universe 6” bust line! Limited to only 450 pieces, this limited unmasked variant comes in a full-color box with a hand-numbered certificate of authenticity. Sculpted by Varner Studios. A Diamond Select Toys product! (DEC168439) Limited to 450 pieces.

Add to your Justice League with this exclusive 6” bust of the team’s scarlet speedster, the Flash! Limited to only 650 pieces, this bust comes in a full-color box with a hand-numbered certificate of authenticity. Sculpted by Varner Studios. A Diamond Select Toys product! (DEC168436) Limited to 650 pieces.

SDCC 2017 JLA ANIMATED SERIES FLASH VARIANT RESIN BUST
Add to your Justice League with this exclusive 6” bust of the team’s scarlet speedster, the Flash! This exclusive edition captures Flash at faster-than-light speeds, and is cast in a translucent material to simulate a speed effect. Limited to only 650 pieces, this bust comes in a full-color box with a hand-numbered certificate of authenticity. Sculpted by Varner Studios. A Diamond Select Toys product! (DEC168437) Limited to 650 pieces.

SDCC 2017 MARVEL GALLERY DEADPOOL VARIANT PVC FIG
The Marvel Universe’s deadliest assassin is ready for his next team-up with this exclusive PVC Diorama! Wearing his X-Men colors, Deadpool leaps from a portal with his twin katanas flashing, and this 10” diorama comes packaged in a full-color window box with a fifth panel. Limited to 4200 pieces. Sculpted by Jean St. Jean. A Diamond Select Toys product! (DEC168441) Limited to 4,200 pieces.

Our Marvel Gallery Iron Man PVC just got an upgrade! As seen in the Superior Iron Man comic book series, Tony Stark wears his gleaming white armor as he rises into the air on his boot jets. This 11.5” diorama comes packaged in a full-color window box with a fifth panel, and is limited to 2500 pieces. Sculpted by Mat Brouillard. A Diamond Select Toys product!(DEC168442) Limited to 2,100 pieces.

The highly anticipated film adaptation of Stephen King’s Dark Tower series now has an ultra-secret Vinimates vinyl figure! This 4” figure of one of the creatures from the film features an articulated neck for different posing options, and comes in a full-color window box. Limited to 1500 pieces. A Diamond Select Toys product!(DEC168448) Limited to 1,500 pieces.

From the Forbidden Planet comes one of the most advanced robots of all time: Robby the Robot! This exclusive 4-inch Vinimates vinyl figure holds a blaster pistol, and comes packaged in a full-color window box. Limited to 2000 pieces. A Diamond Select Toys product!(DEC168446) Limited to 2,000 pieces.

Is he friend or foe? Whichever he is, he glows! The Ghostbusters get their little buddy with this exclusive new Vinimates vinyl figure of Slimer! Cast in an exclusive glow-in-the-dark material, Slimer stands approximately 4 inches tall on his stand, and comes package in a full-color window box. Limited to only 1500 pieces. A Diamond Select Toys product!(DEC168445) Limited to 1,500 pieces. 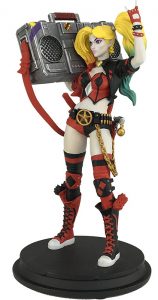 SDCC 2017 IRON GIANT VARIANT VINIMATE
The Iron Giant is cosplaying for SDCC! This exclusive 4-inch Vinimates vinyl figure features the Iron Giant with his famous “S” chest emblem, striking a heroic pose straight out of the classic animated film, and his articulated neck allows you to further customize that pose. Figure comes packaged in a full-color window box. Limited to 1500 pieces. A Diamond Select Toys product!(DEC168447) Limited to 1,500 pieces. 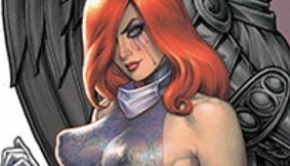 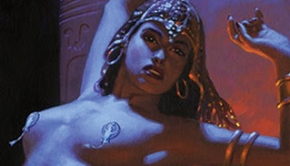