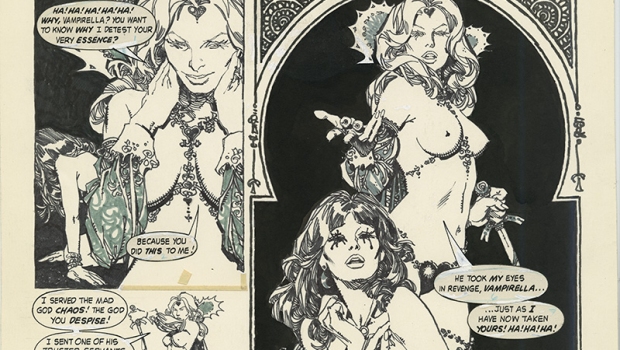 The process of creating each oversized Art Edition format involves high-resolution color scanning of original storyboard artwork, capturing the look of the artwork as originally illustrated, with all blue lines, corrections, pasted letters, editorial notes, and other distinctive creative elements intact. Each scan is then printed on heavy stock paper to give readers the most realistic experience of what it would be like to hold actual storyboard pages.

Jose Gonzalez’s Vampirella Art Edition honors an illustrator whose mesmerizing and macabre interpretation of the raven-haired heroine established him – in many readers’ minds – as the definitive Vampirella artist. Introducing an unparalleled level of sophistication to the visual storytelling of Warren Publishing’s Vampirella Magazine in the 1970s, Gonzalez transformed the one-time horror hostess into a layered protagonist and industry icon. Longtime fans will thrill to see his mesmerizing and macabre artwork in the Art Edition’s high-quality reproductions, representing ten complete stories selected from throughout his entire body of Vampirella work, including “Resurrection of Papa Voudou” (as written by Archie Goodwin), “The Blood Queen of Bayou Parish” (Steve Englehart), “An Eye for an Eye” (Bill DuBay), “Spawn of the Star Beast” (Rich Margopoulos), and more.

“For me, the initial exposure to Jose Gonzalez’s lush artwork was eye opening. The reproduction of the original stories in black and white allowed for a subtlety which was never approached in four color comics. I was lucky enough to be able to acquire a number of stories from the original series over the years. I am looking forward to Dynamite Entertainment’s efforts to expose new readers to the artwork that I love and to give longtime fans access to the work as it was originally created.” Steven Morger of Big Wow Art.

Walter Simonson is one of the most prolific artists ever to work in the comic book medium, a universally admired innovator whose work – whether it be on Manhunter, The Fantastic Four, The Mighty Thor, Jack Kirby’s Fourth World, the list goes on – leaves a mark in the hearts and minds of readers for years afterwards. Walter Simonson’s Battlestar Galactica Art Edition commemorates the master draftsman’s senses-shattering work on the Battlestar Galactica comic book series, published by Marvel Comics from 1979 to 1981. Truly, the adventures of brash pilots Apollo and Starbuck were never so epic as they were under Simonson’s skillful hand, as demonstrated in the scanned storyboard art of the complete stories contained therein. While Simonson himself assumes writing chores in many of the Art Edition contents, contributing writers also include Steven Grant, Roger McKenzie, and Bill Mantlo.

“We are very pleased that our new licensing agreement with Dynamite Entertainment not only creates a fully new John Carter: Warlord of Mars comic book line, but also encompasses the reproduction of the rich, vibrant art of earlier periods by many masters of the medium”, said James Sullos, President of Edgar Rice Burroughs, Inc. “These are some of the legendary artists who contributed so much to comic art. I know that fans everywhere will want to add this beautiful edition to their collections”.
“I was thrilled to hear that Dynamite is doing a John Carter of Mars art edition. I have a great fondness for the original novels and the Marvel comic book series was released shortly after I had finished reading the books. The series boasted work by some of the true giants in the industry and seeing the original art at its full size will be such a treat. I acquired my first John Carter original art page more than 30 years ago and continue to collect to this day. I am happy to be sharing art from my collection and I am also looking forward to seeing all of the other contributions.” Tom Fleming of Fanfare.
“Words cannot begin to express how delighted I am that we’re able to announce the expansion of our Art Edition Program. With timeless classics like Dynamite’s Vampirella, with the first series focusing on incredibly talented artists, with the first being Jose Gonzalez, to one of my heroes, Walter Simonson on one of his earliest works, Battlestar Galactica, where you can see he was always destined to be one of the greats. Add to that Gil Kane, Carmine Infantino and many other great artists in the Warlord Of Mars Marvel Years Art Edition,” States Dynamite CEO/Publisher Nick Barrucci. “These are great high end collectibles for fans, and just the tip of the iceberg for what we have in store for 2015!”

The Dynamite Art Editions are solicited for retailer orders in Diamond Comic Distributors’ Previews catalog, the premiere source of merchandise for the comic book specialty market. Comic book fans are encouraged to place preorders through their local comic book retailers or online booksellers.