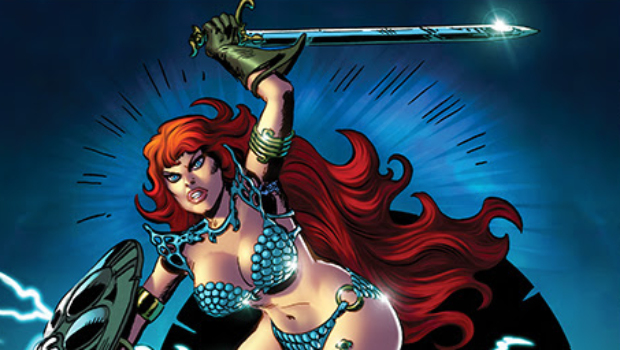 Dynamite Entertainment is pleased to announce the upcoming release of The Further Adventures of Red Sonja Vol1, to go along with the 45th Anniversary of ‘She Devil with a Sword’. The 200+ page collection features issues from the original Marvel Comics series “The Savage Sword of Conan,” with each page painstakingly re-mastered for this volume! Plus, legendary Red Sonja writer and former Marvel Editor-in-Chief Roy Thomas provides an introduction and there it comes with a stunning cover by legendary Red Sonja artist Frank Thorne!

Red Sonja, the “She-Devil with a Sword”, is a high fantasy sword and sorcery heroine created by Robert E. Howard and adapted for comics by Roy Thomas and Barry Windsor-Smith. She first appeared in Conan the Barbarian #23 (Marvel Comics) in 1973. Red Sonja has become the archetypical example of the fantasy figure of a fierce and stunningly beautiful female barbarian. The character now appears monthly in her own series, as well as a series of mini-series and one-shots, all published by Dynamite Entertainment.

“We truly live in an age undreamed of, as evidenced but the continuing trove of classic material, remastered and re-presented for a new audience, and the legion of old-school fans. These are classic tales of Red Sonja, from an all-star creative cast, re-mastered for today.” Said, Editor Joseph Rybandt.

The Further Adventures of Red Sonja Vol1 will be solicited in the June issue of Diamond Previews catalog, the comic industry’s premier source of merchandise for the comic book specialty market, and scheduled to ship in October of 2018. Readers are encouraged to order through their local comic retailers or through digital platforms courtesy of Comixology, Kindle, iBooks, Google Play, Dynamite Digital, iVerse, Madefire, and Dark Horse Digital. Fans are encouraged to follow Dynamite Entertainment’s social media channels for the latest updates on Red Sonja comic books and graphic novels.