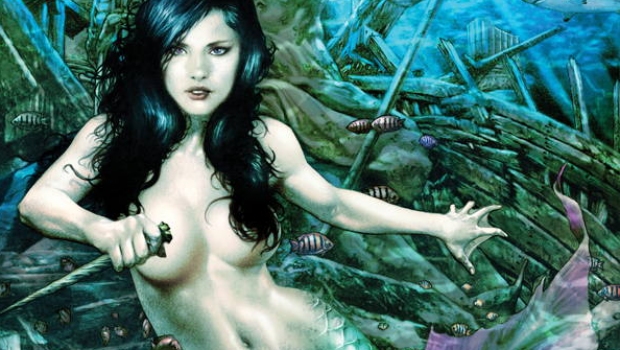 Dynamite Entertainment has provided BF with a first look at their titless, coming to stores worldwide on May 08, 2013.

The Little Mermaid’s fairy tale had a happy ending… but not for her. Now she lives a secluded life away from her people, angry at the world, courting danger at every turn, and daring death to find her. When a handsome prince is exiled on her lonely island, he offers her a chance to pay the world back, asking for her aid in his battle against the oppressive Hieromancers of Atlantis. But can she trust him? Or is he simply the next charming prince in line to betray her?

The She-Devil with a Sword…captured and infected by the bite of a loathsome creature of the night! Offered as a human sacrifice to the vampire’s dark god, Red Sonja must defeat both monster and its master… or be transformed into a bloodthirsty predator Herself!

A mysterious stranger poses a grave threat to Dejah as she becomes the target of a vendetta that goes back to a time before she was born! A pivotal turning point in the life of Dejah Thoris.

Fans, ask your retailer for these variant incentive covers!

John Carter is a prisoner of the brutal tyrant Salensus Oll. His princess is still in the clutches of the ever-sleazy Matai Shang. But Carter’s a lucky guy! A friendly fleet is approaching Salensus Oll’s domed fortress. There’s just one little hitch: the ships are doomed if Carter can’t escape and shut down the terrible Guardian of the North that renders Salensus Oll invincible. Even if he breaks free, Carter will have to face the guardian of the Guardian – the greatest swordsman Mars has ever known!

Set The Controls For The Heart Of The Sun” (Part 1 of 3) – After being scattered around for a bit, Team Vampirella is reunited with new purpose. It’s a good thing, too, because the team will have their hands full fighting a coven of witches in the present, while Vampirella and Criswell are otherwise occupied. And by “occupied,” we mean their minds have been projected 100 years into the future!

The biggest crossover event ever from Dynamite Entertainment stars an astounding array of characters who must form an uneasy alliance and save the world from the Mayan doomsday prophecy! From sword-wielding woman warriors to mad scientists, from vampire vixens to undead overlords, Prophecy has everything… and then some! When flame-haired warrior Red Sonja follows sorcerer Kulan Gath through time from the barbaric Hyborian Age, she unleashes a chain of events that will put her side-by-side with an unprecedented gathering of characters: Dracula, Vampirella, Pantha, Athena, Eva, Herbert West, Reanimator, and Ash from “Army of Darkness.” Even Sherlock Holmes, Dr. Watson, and Alan Quatermain get in on the action!

“Marz, Geovani, and Lucas are doing everything right, from huge stakes to gorgeous art and a sense that anything’s possible.” – Newsarama

“This book is the perfect example of how a crossover book doesn’t have to be just for dedicated fans. Anyone can pick up, read, and enjoy Prophecy. Walter Geovani keeps each page fresh with his art by mixing up the composition and layouts, and on top of that, the art looks pretty and sets a great tone.” – Comicvine