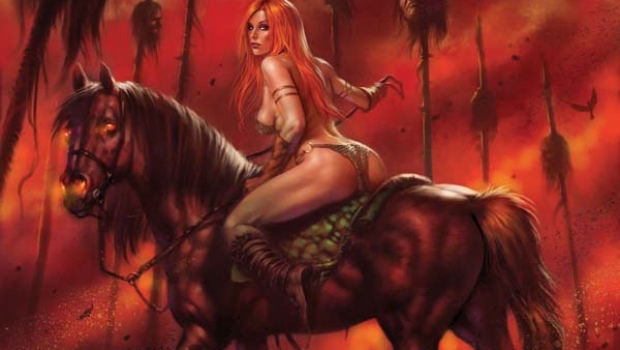 Dynamite Entertainment has provided BF with a preview to Green Hornet: Legacy #37, coming to stores May 29, 2013.

For twelve years, Jessica Blute has successfully hidden her blood-drenched past, but deep down she has always known that her new life as Jennifer Fellows was at best a temporary fix. Now, caught spying on Wendell Cortland by his henchman Rudy Hooper, Jen is forced to take action, finally setting in motion a chain of events that will change her life forever… … and God help anyone who gets in her way.

It’s Judgment Day on Mars. Everything John Carter has achieved has lead him to this final confrontation with the cruel tyrant of the Martian north. But he’s going to be so busy commanding his army that he’s not going to be able to rescue Dejah Thoris this time – she’s going to have to rescue herself! And even if Carter is victorious, he

has upset the ancient religion of Mars and smashed the red planet’s eons-old customs. What will be his reward? The epic battle to unite all of Mars awaits you in Warlord of Mars #25: The Final Reward!

The Crimson Well” (part 1 of 6) – The She-Devil has been suspiciously absent for nearly a full season. There are many rumors and tall tales surrounding her disappearance, but the truth of the matter is far more outlandish, and terrifying, than any tavern story. Following the PROPHECY event, Red Sonja has placed herself in exile, desperately hoping to protect the world from the demonic influence that threatens to consume her very soul.

For the first time ever, two of the most iconic vampires in pop culture – Vampirella and Barnabas Collins – meet in a blood-curdling thriller! Can these very different vampire heroes set aside their distrust to together bring down the notorious Big Apple Butcher, or will their bloodthirsty natures destroy them before the killer strikes again? And who — or what — is pulling the strings of the Butcher? The answer is an evil older than Barnabas and Vampi combined! Featuring appearances by Quentin Collins and Pantha, Dark Shadows / Vampirella collects all five issues by acclaimed writer Marc Andreyko and artists Patrick Berkenkotter and Jose Malaga.

At the cursed hand of the sorcerer Thulsa Doom, Atlantis sank beneath the waves many eons ago. Now that same evil hand summons it back from the depths, to enact vengeance against the entire world. Only Red Sonja can protect Hyborea from the power of Atlantis… but who will protect Atlantis from the power of Thulsa Doom Kingdoms will fall and the oceans will spill over the earth! Atlantis Rises collects the entire four-issue miniseries, plus all the gorgeous cover artwork by Lucio Parillo. 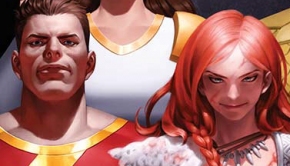 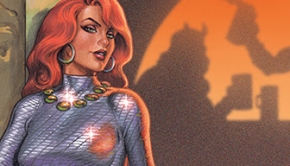