Empowered Valentines For Your Soldier of Love!

The Soldier of Love may be causing problems for our heroin Empowered, but today she’s dealing the cards in your favor. If you have a special hero of your own you’d like to make your Valentine, nothing says “my heart is locked and loaded for you” quite like our Empowered and the Soldier of Love Valentines (because they literally say that.)

Whether you’re crushing literally or metaphorically, The Soldier of Love is in your corner. At least for today. Next week, she wreaks havoc on the hearts of the citizens of Cape City when Empowered and the Soldier of Love #1 hits comic stands! 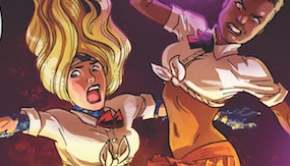