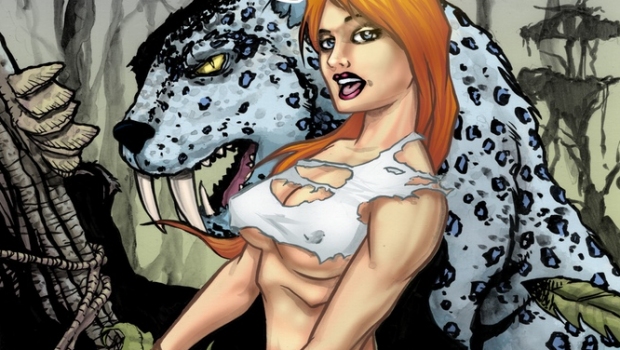 Jane Masterson is a scientist creating a particle collider which can open time portals and produce black holes. What can go wrong?

About the JURASSIC JANE COLLECTION: Originally publishing in 1997 from Everette Hartsoe’s London Night Studios. Story and created by Everette Hartsoe, written and drawn by comic veteran Skylar P. Owens. The 7 issue mini series over the year built a loyal cult following to be such an obscure title. Now nearly 20 years later, Hartsoe’s Evolutionary Comics is re-imagining, relaunching and rebooting this wild and crazy Jungle Girl title!

ABOUT THE ALL-NEW JURASSIC JANE reboot #1 An all new 32 page introduction comic, written by Everette Hartsoe and drawn by Nestor Ruiz

This new story line re-invents the Jurassic Jane lore and opens up the Hartsoe world to a different niche while maintaining continuity with the current EVOLUTIONARY COMICS storylines of HELL RIOT, tying the two titles into one shared Universe.

JURASSIC JANE tells the story of scientist and entrepreneur JANE MASTERSON , CEO of HEAT ( HUMAN ENGINEERING of ADVANCED TECHNOLOGIES) Within the walls of the multi-billion dollar corporation her late father’s partner Dr. Sebastian has unlocked the secrets of time travel and molecular mutation or so it seems. Wanting to maintain full control over it’s untapped powers, Sebastian seeks to shut Jane out of his findings, once and for all.

Join Everette Hartsoe in his Kickstarter-adventure!