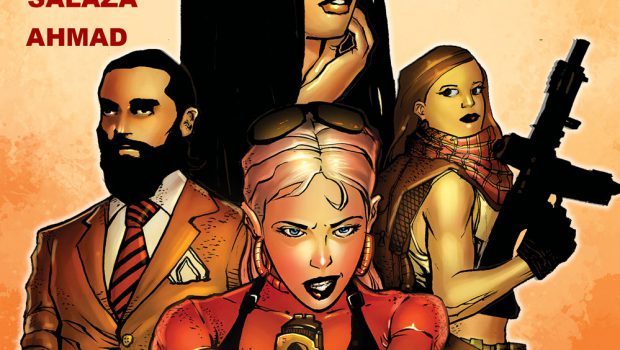 BAYONET, the newest comic book mini series created by indie comics’ maverick, Everette Hartsoe tells the story of Sasha Ravenwood, a retired assassin turned mentor to a homeless girl named Nix. Both share telekinetic and psychokinetic gifts that make them a far dangerous threat to the secret society that enlisted them.

BAYONET: created and written by Everette Hartsoem, with art by Marcelo Salaza and colors by Nasir Ahmed.

Hartsoe’s Bayonet will be the 1st title from the newly formed cinematic universe ‘RAZORVERSE’ and will launch a universe of all new properties set up for TV and film.

“ My goal is to have the new comic stories match the films or tv projects in development so there is no confusion about the characters and storylines that are being told. This comic book and entertainment merger is unlike the offerings from MARVEL and DC COMICS, where the movies/TV don’t match what is going on in the comics. This can be annoying as well as confusing, so we are removing it from the equation.” stated Hartsoe

What can you expect from RAZORVERSE storylines: it will have an all out attack of your senses in a non-stop adrenaline thrill-ride featuring female lead protagonist.

Special edition covers, trading cards, post cards original art and prints. Hartsoe is also adding producer tiers that can get backers film credits on IMDB, invites to screenings, on-set access during the filming, even a chance to be in the movies as well.

Check out the Kickstarter, interiors and more on https://www.kickstarter.com/projects/everettehartsoe/everette-hartsoes-new-bad-girl-bayonet-1