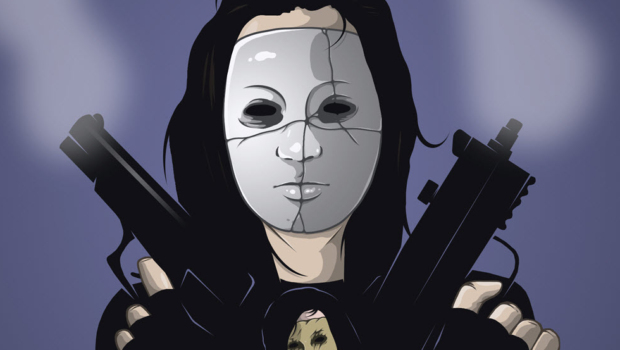 Everette Hartsoe, the creator of the popular 90’s comic series RAZOR, which is in development for a major motion picture. The Fast and The Furious director Rob Cohen is set to helm with Fox’s The Gifted Emma Dumont starring as the Angel in Black. Now under the newly branded Evolutionary comics banner, Hartsoe ushers in the next wave of dark female-lead stories to comics, television and movies. British graphic novelist Luke Cooper’s HOLLOW GIRL kickstarts the wave with a 150-page graphic novel currently on Kickstarter.

“More than a decade ago, the police were called to the site of a bloodbath. Sat amongst the chaos and the gore was a blood-spattered little girl. With no other suspects or leads, it became clear that she had murdered her own parents. Showing no signs of remorse or regret, she was said to be a girl without a soul.

“Now, wearing an expressionless white mask and armed to the teeth, she kills for the dead, a willing vessel for vengeful souls.” states creator, Luke Cooper

“ I was drawn to the character and the pure art style driving the ultra-violent supernatural storyline, which reminds me of my own beginnings with RAZOR.” states Everette Hartsoe. Hollow Girl needs to be seen in print as well as in live action. I’ve put a team together with Unravelled director writer Michele Grey Hartsoe and screenwriter Dan Wilder, Hexanne to help package Hollow girl as a feature film for my directorial debut.”

Evolutionary comics plans to role out several graphic novels through the final quarter of 2018 into 2019, all being optioned for tv and film.