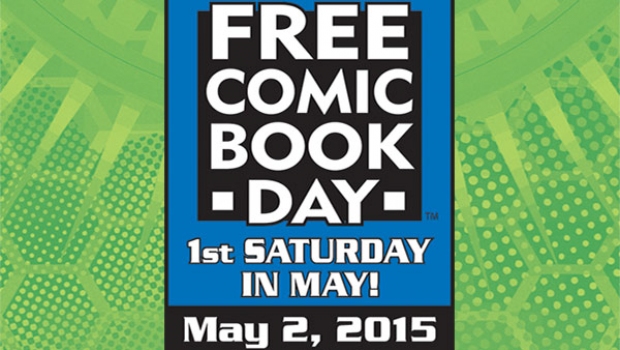 Diamond is excited to announce that the biggest, most anticipated comic book event of the year, Free Comic Book Day, will be taking place on Saturday May 2, 2015!

The biggest event in the comic book industry, Free Comic Book Day (FCBD), is taking place on Saturday May 2nd, at participating comic book specialty shops across the U.S., Canada, and worldwide! 2015 marks the fourteenth FCBD celebration and is expected to be bigger and better due to an increase in fan and retailer participation, allowing new and devoted comic book and pop-culture fans the chance to discover new comics for free while also exploring what other treasures their local comic shop has to offer.

The Free Comic Book Day Selection Committee of retailers picked 50 comic books they believed fans of all ages would find entertaining and enjoy reading for the first time. Anyone who goes into a comic shop on FCBD will be able to choose from a variety of titles containing new and classic stories and iconic characters from publishers DC Comics, Marvel, Archie, IDW, Dark Horse Comics, Image Comics, and other major and independent publishers.

Participating comic shops will pass out comics for free on May 2nd, and also host community events such as costume contests, sketches by guest artists, comic-creator signings, raffles, door prizes, photos with costumed characters (cosplayers), and other community building activities throughout the day. Every comic shop celebrates FCBD in their own unique way allowing new comers an opportunity to see their local comic shop’s personality and its thriving community of pop-culture enthusiasts. FCBD has been an industry-wide success in the promotion of reading comics and is one of the reasons behind the comic industry’s continuing momentum of growth.

“Free Comic Book Day is the biggest and most anticipated event of the year for all comic book enthusiasts. It’s the perfect opportunity for new and devoted comic book, entertainment and pop-culture fans to get great comics for free, while participating in fun comic shop events,” said Free Comic Book Day Spokesperson Deborah Moreland. “Comic book shops see FCBD as a great way to show off their stores and help novice and veteran fans find stories they will love that not only entertain but enrich their lives. It’s also a great excuse for people to let their inner “geek” out while having fun meeting like-minded people and exploring their local comic shop.”

ABOUT FREE COMIC BOOK DAY—Free Comic Book Day is the comic book specialty market’s annual event where participating comic book shops across North America and around the world give away comic books absolutely free to anyone who comes into their comic shops. The event is held the first Saturday in May and is the perfect opportunity to introduce friends and family to the many worlds of wonder available at local comic book shops. From super-heroes to slice-of-life to action/adventure and beyond, Free Comic Book Day has a comic book for everyone!