In July, Dynamite Comics is relaunching their beloved Vampirella series as part of her 50th Anniversary blowout! And it will be a blowout, because they’re kicking things off on #FreeComicBookDay with a LARGER THAN LIFE special, Vampirella #0

JAN190026
(W) Christopher Preist
July 2019 is the 50th anniversary of Vampirella, and to celebrate, Dynamite is relaunching the title that very month, with a very special preview to come in this year’s FCBD special, Vampirella #0!

Vampirella #0 will also unveil our lights-out new creative team as they present the prologue to a story so big, they had to hold it for Vampi’s birthday! 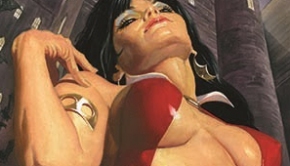