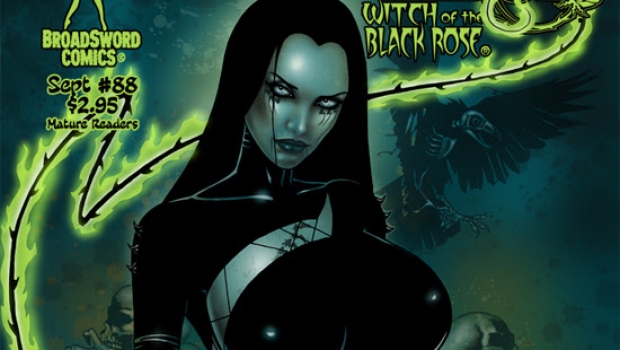 Broadsword Comics has provided C4S with covers for Tarot Witch of the Black Rose #88, shipping Sept 2014.

Tarot Witch of the Black Rose #88

“Blessed are the Destroyers!”, shipping Sept 2014

Mature Readers Raven Hex, after fully healing from the events in the Faery Realm ,seeks revenge against Lord Thornwic for betraying her family and almost killing them. The Dark Witch is focused on delivering Death but will the Swordsman to the Horned God be too powerful? As always regular edition created with 2 Jim Balent covers.
Issue Ships late Sept 2014

Don’t forget to get your Deluxe Litho Edition

By ordering with the ETC, you will receive both covers with a bonus Gift! for only $5.00 + shipping ETC may NOT ship early, they will go out as soon as we receive them from our Printers.